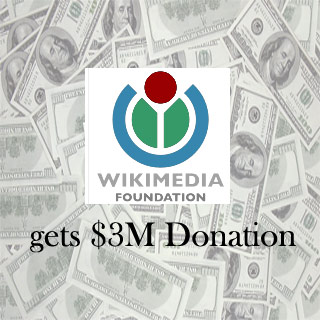 The nonprofit group behind the popular internet encyclopedia Wikipedia, is on its way to get its biggest ever donation of $3 million from the Alfred P. Sloan Foundation.

The whopping amount of $3M will come in $1M each installment over a period of three years and is basically intended to make the San Francisco-based Wikimedia Foundation financially more secure as it hires more staff and wants to enhance the quality and reach of Wikipedia content, noted the foundation heads. Currently the foundation has just 15 full-time employees and by 2010 it aspires to grow it to around 25.

Jimmy Wales, the project’s leader and a board member of the Wikimedia Foundation said, “We think it will pave the way towards more donations as it is a signal that a major foundation sees good in what we are doing.” Wales added, “And it should take away a lot of the questions people have had about whether we will need advertising to survive.”

Among the other improvements and enhancements, the money would go specifically to a new Wikipedia feature dubbed “flagged revisions,” through which experienced editors will be able to publicly and visibly grade the quality status of articles, in effect, working as a kind of ‘nutrition labeling’ for Wikipedia content. In addition, the money would also go towards future events such as a Wikipedia Academy, where people would be guided on how to contribute.