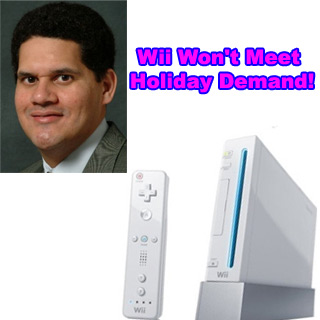 If you prefer spending this month’s pocket money on buying the Wii, instead of the expensive pink dress that your girlfriend wants, then trust me you are just making the right choice for more reasons than one!

According to Nintendo America’s Reggie Fils-Aime, the company does not have enough stocks of the Wii to meet customer demands for the console this Christmas.

Whilst making an honest confession about the Wii to the Mercury News, Fils-Aime admitted that for a second year in continuity the home console is likely to be meager on store shelves, with current supplies lasting no longer than a day before selling out.

“We’re working very hard to make sure that consumers are satisfied this holiday, but I can’t guarantee that we’re going to meet demand. As a matter of fact, I can tell you on the record that we won’t,” he said.

“What I can tell you is that typically, our inventory is lasting a day… I don’t think we will know when supply crosses with demand until after the holiday season,” Fils-Aime continued.

He further added that the problem doesn’t lie in the production of the Wii, but in the heavy demand for the gaming console.

“The issue is not a lack of production. The issue is we went in with a curve that was aggressive, but the demand has been substantially more than that. And the ability to ramp up production and to sustain it is not a switch that you flick on,” he added.

Now the present statement is quite contrary to the one passed by Fils-Aime a few days back where he stated that there would be an unprecedented amount of Wii consoles on their way for the holiday season. But we truly understand that with Nintendo hitting every possible record and outbeating both its rivals, i.e., Microsoft’s Xbox 360 and the Sony PS3, in the console war, this condition is more than predictable.