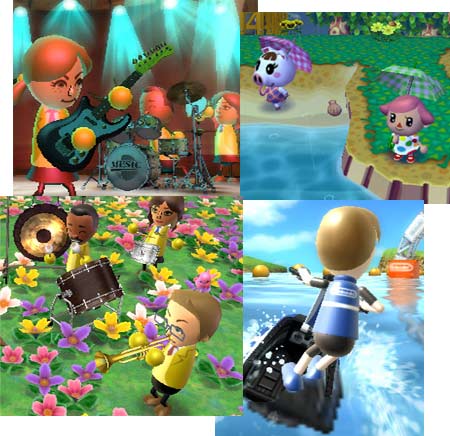 Nintendo made a lot of announcements at E3 2008. The gaming console manufacturer which made a stunning comeback with its innovative motion sensing console announced three new games for the Wii and a game for Nintendo DS. Wii Music, Wii Sports Resort and Animal Crossing: City Folk are the titles to hit the Nintendo Wii soon, while the Grand Theft Auto and Guitar Hero Games have been announced for Nintendo DS.

“Much has been reported about the ‘expanded audience’ for games, but what’s really at play is an expanded experience,” said Cammie Dunaway, Nintendo of America’s executive vice president of Sales and Marketing. “People of all ages having fun together-whether in the same room or from remote locations-puts smiles on faces and drives millions of new players into video game entertainment.”

Wii Music is another innovative title what Nintendo has brought for Wii lovers. With the help of the Wii Remote and Nunchuk controllers, gamers can play more than 60 different instruments, including a violin, steel drums, electric guitar and even a cowbell. In addition players can improvise on their arrangements by skipping a note or adding 10. They can also share their arrangements with friends or family having Wii Music. Players can rock this year’s holidays with Wii Music as it is scheduled to launch by the festive season.

Animal Crossing: City Folk is also making its way on the Wii by this holiday season. Players can improve their community, chat with the locals or just spend the day fishing and collecting fossils. Players can visit friends’ towns and chat with one another using the new WiiSpeak microphone. This microphone will be sold separately at $29.99.

Conversely, Nintendo has also announced two titles for its portable gaming system, DS. Grand Theft Auto: Chinatown Wars and Guitar Hero On Tour: Decades are anticipated titles for Nintendo DS. The two titles are expected to be available by this Fall.