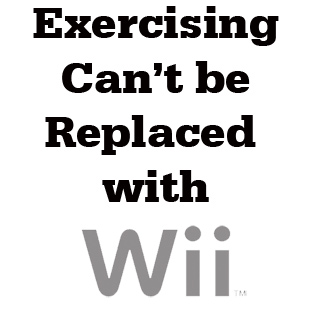 Nintendo’s Wii is the most popular console in 2007. Children love to play imitative games on Wii and parents do not mind as they think the console provides the required amount of exercise to children. However, a British study has revealed that exercise provided by Wii is not enough for children.

The British Journal of Medicine’s study says that physical activity of playing games on Wii is not up to the mark. Young children do not get enough exercise by playing Wii.

The Journal’s study included six boys and five girls aged 13-15 years. They were asked to play four different games for 15 minutes each on both a Wii and an Xbox 360. Participating children played Boxing, Tennis and Bowling on Wii Sports. While, they played two races on a single player race mode on Project Gotham Racing 3 on the Xbox 360.

Research found that Wii burnt 2% more calories as compared to the Xbox360. However it is still not enough to replace Wii with traditional workout routine.

The British Journal of Medicine also pointed out that Wii is a powerful console for sedentary kids as it makes them move and to be active. The Journal further said that such positive behaviors should be encouraged.