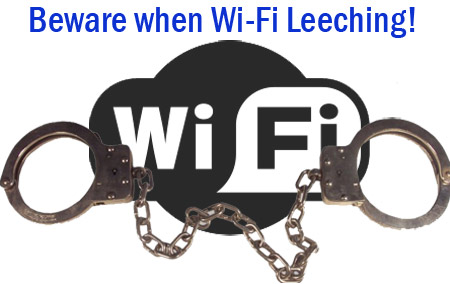 If you live in the UK and are a Wi-Fi user, then you better beware because the police are cracking down on freeloaders who user other people’s Wireless Internet connections for free.

The latest case was a 39-year old London man who was arrested because he used a laptop to access someone else’s Wi-Fi. He browsed the Internet via an unsecured home network in London.

According to a Reuters report, the London man was first spotted by officers as he used his laptop sitting on a garden wall of a private home in the West London suburb of Chiswick.

When questioned by the officers, he admitted using a third party’s unsecured Wi-Fi access point to gain access to the Internet.

However, according to the Metropolitan Police, this is not actually part of a proactive operation.

The Police Community Support Officers do not have the same powers as regular police offers, and so they had to wait for other police officers to arrest him.

A spokesperson said, “This was not a strategic, pre-planned operation. We’re clearly not targeting broadband theft. The PCSOs saw a man acting suspiciously and investigated.”

“This arrest should act as a warning to anyone who thinks it is acceptable to illegally use other people’s broadband,” said Detective Mark Roberts.

“To do so potentially breach the Computer Misuse Act and the Communications Act, so computer users need to be award that this is unlawful and police will investigate any violation we become aware of,” Roberts added.

When the police examined this 39-year old London-based man’s laptop, they discovered that he had logged on a number of times before. He was also found guilty of dishonestly obtaining an electronic communication service and his computer and wireless card were confiscated.

The London-based man was arrested under section One of the Computer Misuse Act and Section 125 of the Communications Act 2003. Furthermore, he was fined £500 and given a 12-month conditional discharge.

He was later released on police bail. However, he has been ordered to return to the police station in Chiswick on October 11 2007.