We have no idea why AT&T is releasing the Samsung Galaxy S3 mini in the US after all this while. An image has surfaced on the web and it clearly shows the said smartphone with an AT&T branding. It could arrive on August 23 as that’s the date on the leaked picture. The Samsung device was released back in 2012 and already has a successor in the form of the Galaxy S4 mini.

Well, nothing has been revealed officially as yet, but the picture has surfaced through the trustworthy @evleaks Twitter account which leads us to believe that the handset could be in the pipeline. It looks like the carrier wants to add some low-priced phones to its portfolio and what better than a mini version of an ex-flagship? And if you take a look at the specifications of the S3 mini, you’ll find that they are not so outdated after all. A 4-inch touchscreen, Jelly Bean, dual cameras, up to 16GB onboard memory and a dual core processor are just some of the main features of this compact gadget. 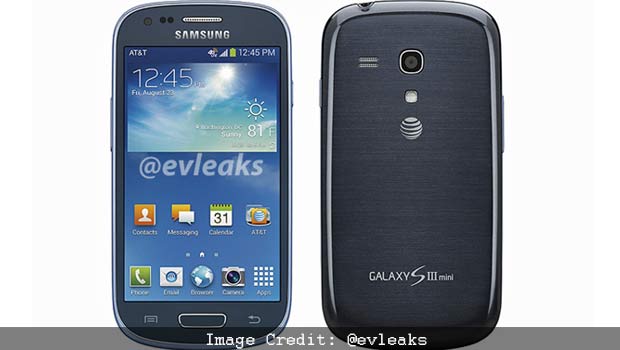 The Galaxy S3 mini’s Super AMOLED display has a resolution of 480 x 800 pixels and it is accompanied by a VGA webcam for video calling purposes. On flipping it over, potential buyers will find a 5MP auto focus snapper complete with LED flash. Based on the Android 4.1 OS, the handset acquires steam from a 1GHz chipset and draws power from a 1500mAh battery.

As the AT&T-bound Samsung Galaxy S3 mini has not received official recognition yet, there’s no word on the pricing or availability information of the phone.