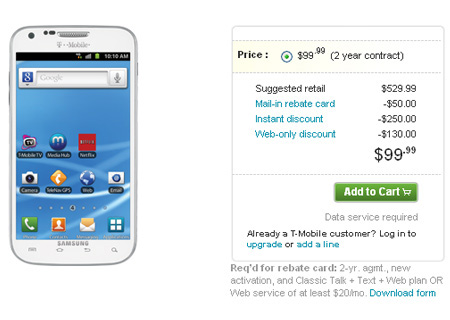 Launched just a few days ago, the white Samsung Galaxy S II smartphone from T-Mobile in the U.S. is already seeing a price cut. The network carrier is now offering this variant of the handset through its online store for $99.99 after a web-only discount that is expected to end tomorrow.

So it looks like the Galaxy S II from Samsung is still going strong. And according to a post on Unwired View, the web-only offer will be available until this Sunday, that’s December 18. Potential users can pick up the handset with a $130 discount that is accompanied by the inevitable 2-year contract. Since the web-only promotion applies to the white variant of the smartphone, the black one will continue to ship for $299.99 this weekend. 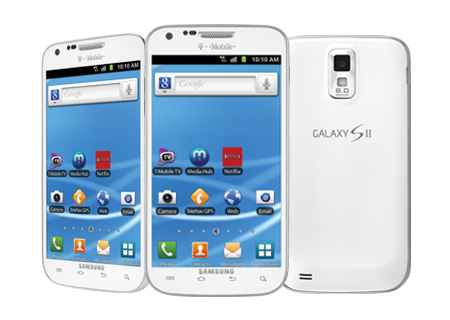 Specification-wise, the handset comes powered by a 1.5GHz dual core Qualcomm Snapdragon S3 processor that’s backed by 1GB of RAM and it runs on the Android Gingerbread OS. Sporting a 4.52-inch Super AMOLED Plus WVGA touchscreen, the internal storage capacity amounts to 16GB that’s further expandable to a maximum of 48GB via the microSD slot. The device also runs on the carrier’s 4G network providing download speeds of up to 42Mbps and is equipped with DLNA compliant wireless streaming capabilities as well as an HDMI port.

The white T-Mobile Galaxy S II price tag reads at $99.99 as a limited time web-only offer. The smartphone can be purchased through the network carrier’s website at the discounted rate until tomorrow, after which the company is expected to revert its price back to the original $299.99.