White Nexus 4 no longer available on Google Play in US 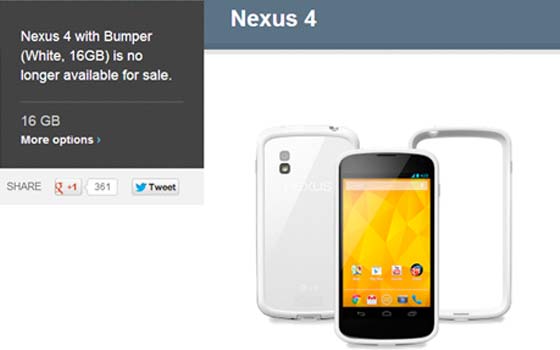 The white Nexus 4 has sold out on the Play store in the US and here’s the worst part – It isn’t going to come back in stock as the smartphone was a limited time promotion only. Well, things could turn out differently if Google and LG plan on going for a second round with this particular version of the Android flagship.

The white Nexus 4 was officially announced in May after a series of leaks and speculation. The device, simply put, is a color variant of the original and it packs in the same hardware as well as software features. However, the conglomerate announced that it planned to sell the phone for a limited time period only or until stock lasts. Well, both the 8GB and 16GB versions are now sold out.

This apparently applies to the US, while those in the UK should be able to get their hands on the white Nexus 4 and it’s still available in India. The news of the handset no longer being acquirable on the Play store was confirmed by the search giant to Android Police. The report notes that the URLs to the product page are still functional, but the handset isn’t visible from the store directly.

The white Nexus 4, like its black variant (read our review), currently operates on Android 4.2. Well, version 4.3 Jelly Bean is expected to arrive before the end of this month along with a new Nexus 7 tablet. Additionally, another software revision, dubbed version 5.0 key Lime Pie is apparently scheduled for launch in October. The new 7-inch slate will come with a Snapdragon 600 SOC, 2GB of RAM, 4G LTE, 32GB of storage, a 1080p display and a 5MP rear camera.

Those still longing to own the white Nexus 4 are in luck as T-Mobile still has the 16GB smartphone in stock and is offering it for a price of $19.99 with monthly payments of $17 for 2 years or by paying the full retail amount of $427.99.