If you’re wondering where to watch Beastars, the hit anime series that has captivated a fair chunk of the community, then you’re in the right place. Searching for interesting anime to watch can be overwhelming to fans who are new to the medium. So we’re going to explore what Beastars is and whether the hype surrounding the anime series is well grounded.

Let’s begin with Beastars season 1, where the world is filled with anthropomorphic animals who make up a civilized society. Hidden behind this veil is an uneasy tension growing between herbivores and carnivores. This volatility reaches a boiling point at Cherryton Academy when a predatory incident leads to the death of Tem the alpaca, a drama club student in the school.

Legoshi, a friend of the deceased student and a part of the stage crew, has been an object of fear and suspicion his whole life due to him being a carnivorous wolf. An esoteric encounter with Haru, a white dwarf rabbit who receives a fair amount of hate from her peers, guides Legoshi on a path to finding himself. His feelings for Haru coupled with his own predatory urges make matters all the more convoluted.

Beastars has a very nuanced story setting where different kinds of animals coexist. It displays the complex nature of instincts of various species. It’s one of the few anime released in the past few years that tend to delve into the inner psyche of beings that inhabit the world. It also boasts of an incredible catalogue of soundtracks that even non-anime fans will like. It’s a coming-of-age story that has quality drama building up in the background.

The Beastars manga series is the source of the anime adaptation and is written by Paru Itagaki who is the daughter of the famous manga artist Keisuke Itagaki, the author of Baki. It’s produced by Studio Orange. They have employed surprisingly good CGI animation to adapt the manga in the moving medium form. It’s pretty rare considering the fact that the anime industry, in general, has a bad track record of using 3D graphics. Beastars season 2 had aired from January to March 2021 only on Netflix Japan. There are only 2 seasons that currently exist for Beastars and each of them have 12 episodes. Let’s get to finding out where to watch Beastars seasons 2 and 1. 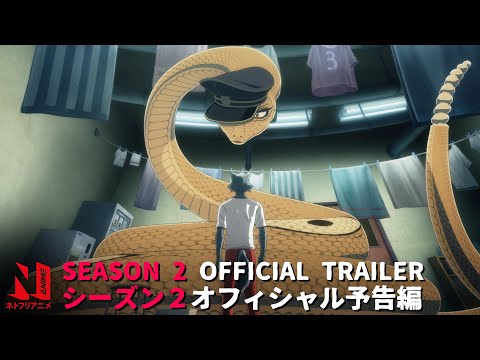 You’re in luck if you have a Netflix subscription. Beastars season 2 finished airing in Netflix Japan way before the global release. Since Netflix drops its content in bulk, they delayed the release outside Japan until recently. The second season came out on July 15, 2021 and is available for viewing in the US and France.

The availability varies by region for other countries across the globe. You may be able to unlock season 2 of Beastars by accessing Netflix via a VPN. But it is against the streaming service’s terms of use. So while it is not illegal to watch Netflix using a VPN, the company could still suspend your account. Secondly, some countries like the UAE and Russia have banned VPNs. This means you could get into trouble with the law for using such a service.

If you’ve purchased a Crunchyroll subscription as a fan of anime in general, then we have bad news for you. It isn’t available there nor is it available on the other prominent anime streaming platform, Funimation.

Now you might be thinking “What if I have Hulu? Does it stream Beastars season 2?” Nope, unfortunately, it doesn’t.

But wait, the majority of anime we see today originates from Japan and the same goes for Beastars. Then why does the series only stream on Netflix instead of the streaming services dedicated to anime? For those of you who’re wondering how digital viewership rights and licenses work, it’s a pretty labyrinthine system that requires the pre-requisite knowledge of legal jargon. But we’ll try to put it in a comprehensive basket.

Netflix doesn’t technically make or directly own Beastars. They just have exclusive licenses to stream the anime. Streaming platforms, especially in the past few years, have been doing this a lot so to gain an edge in the market over rival companies. It’s an unfortunate circumstance in which the only way an anime fan can legally watch Beastars is through a different platform than the one they use to strictly watch anime — like Crunchyroll or Funimation.

Where to watch Beastars season 2 in the US?

If you live in the United States, you can watch the show on Netflix. Beastars season 2 was released on July 15th and is available for viewing. The previous season is also out on the same platform. Each of the 24 episodes present in both the seasons have a story length of 24 minutes.

Since Beastars is licensed by Netflix it is currently not available on other popular streaming platforms like Hulu, Crunchyroll and Funimation. This could change at a later date.

Is there another Beastars season 3 on the way after the second one?

The source story material for Beastars is more than adequate for another season. In fact, it’s enough even for a fourth one. Paru Itagaki’s manga, which the anime series has been adapted from, has been completed. Its final volume was released back in October of 2020 and the entire manga has a total of 22 volumes.

Thanks to everyone who supports our show. Orange will continue to animate the show! Artwork provided to us by @itaparu99 ❤️https://t.co/8GlJ6nzWVO pic.twitter.com/z8GLhfJmtt

On July 20, 2021, Studio Orange confirmed that it was working on Beastars season 3. The anime studio as well as Netflix tweeted fresh artwork of the main characters, sketched by Itagaki. No new voice actors have been announced yet.

Judging by the fact that it took around a year for each of the previous seasons to be launched, the release date of Beastars season 3 could fall anywhere between April and July 2022.

It’s definitely worth checking the books out in the mean time. But if you’re an exclusive anime watcher, then you’ll have to wait for a year at least. The 3rd Beastars season is likely to have 12 episodes, judging by what we’ve seen from the previous additions.

How many episodes does season 2 have?

Season 2 consists of 12 episode just like season 1. The episode lists are as follows:

Does Beastars have a movie?

No. Unlike other anime franchises, Beastars does not have a movie; not yet anyway. Besides, Beastars is a story-intensive series and any filler content that the studio produces as an original movie might degrade the experience. However, if they intend to go the Demon Slayer: Mugen Train route and produce a canon film, that’ll be exciting. This means the movie will be based on the manga and will not deviate from it.