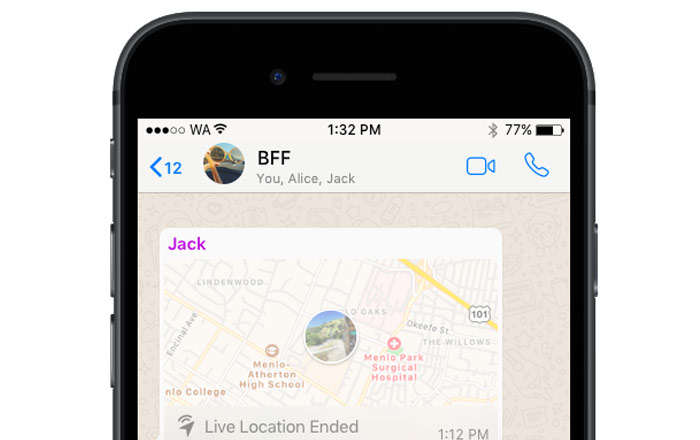 WhatsApp’s reportedly working on enabling group video and voice calls for iOS and Android, 2 in-demand features which have been rumored for a while. One-on-one video calls have been around for quite a long time now, so it makes sense to move on to the next big thing.

WABetaInfo recently tweeted about the tools, claiming that version 2.17.70 of the iOS app has very hidden references to group voice calls. This makes things a bit more official. It’s apparently found several mentions of group voice calling recently, but only one for group video calling.

Interestingly enough, WhatsApp itself offered up a clue about its plans just last week. The company recently announced its new live location feature in a blog post. The article included 3 pictures of the ability in action. If examined closely, it’s easy to see that the second screenshot includes 2 icons for video and voice calls.

Also Read: WhatsApp’s ditching Apple’s emoji for its own

While these symbols are present in one-on-one chats, they’re nowhere to be found in WhatsApp groups right now. Unless someone at the firm made a huge mistake, it’s more than likely the brand was trying to serve up a hint.

How far away in the future group video and voice calls are is unclear as of now. WABetaInfo is of the opinion that WhatsApp is concentrating on its new recall tool, so a 2018 launch seems likely since group video/voice calls require a lot of development.

Once it does arrive, WhatsApp will be directly competing against chat apps like Skype and Hangouts. Stay tuned for more details as that day gets closer.