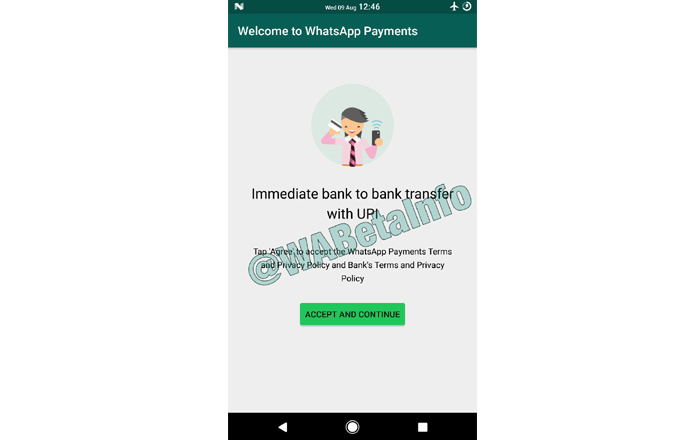 WhatsApp has long been rumored to be eyeing the business and UPI payment transfer sectors as avenues to grow in India. As it turns out, the latter may not take too long to arrive since the feature has been spotted lurking within the app’s Android beta.

Talk of WhatsApp hopping on the UPI bandwagon first emerged in April this year. At the time, the company was said to be in talks with the government and had plans to roll out support for the payments platform within 6 months.

There’s now proof of this in the form of a screenshot shared by WABetaInfo. It features a window headlined with the words ‘Welcome to WhatsApp Payments.’ The text within talks about immediate bank to bank transfers with UPI. It seems to be an opt-in service, meaning users will have to accept the terms and conditions to get started on it.

The feature is apparently hidden within WhatsApp for Android beta version 2.17.285 and is still under development. It’ll be interesting to see how the brand goes about it. Digital money transfers are still at a nascent stage in India, with the rise of Paytm and demonetization accelerating the segment’s growth.

WhatsApp’s arrival could further shake things up taking into consideration how popular it is in India. Over 200 million people count themselves as its daily active users. The company reportedly scrapped plans for a virtual wallet in view of the RBI’s draft guidelines and chose UPI because other systems might have hampered user experience.