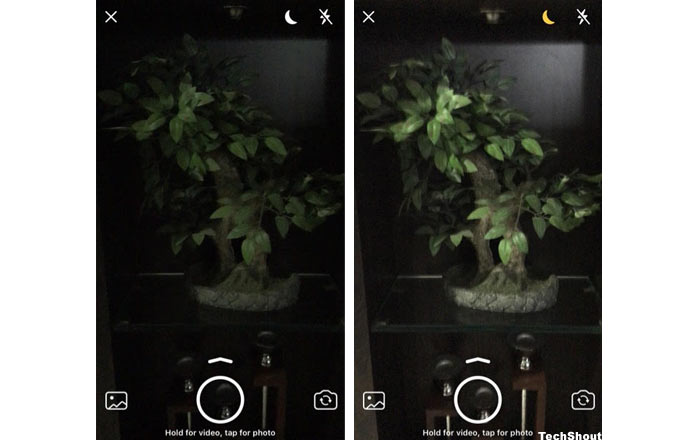 WhatsApp for iOS has gotten hold of a brand new feature which helps people capture better photos in the dark. Dubbed Night Mode, the tool is rolling out to all users who have updated to version 2.17.10 or above of the app.

WhatsApp’s in-app camera is pretty basic when it comes to shooting options, so the addition of a Night Mode is a welcome one. It was first discovered by PhoneRadar in the depths of the app’s translation pages before rolling out in earnest to everyone.

Night Mode basically acts as an alternative to flash. Instead of the harsh light of the latter, the former brightens up the image without adding any external light and overexposing the shot. As can be seen above, the feature is represented by a moon symbol and can be found next to the flash icon.

Interestingly, Night Mode automatically pops up only in dim environments. When it does appear, it’s switched off by default. Users will have to tap on the moon for it to glow yellow and work its magic. All-in-all, the results are pretty adequate and should suit the needs of consumers looking to improve their photos without the help of flash.

Once a photo has been clicked, individuals can apply WhatsApp’s newly introduced range of filters like Pop, Cool, Chrome, Film, and B&W. You can download the iOS version of the app via the App Store. Night Mode hasn’t made its way to Android patrons yet, but it’ll probably make the trip soon.