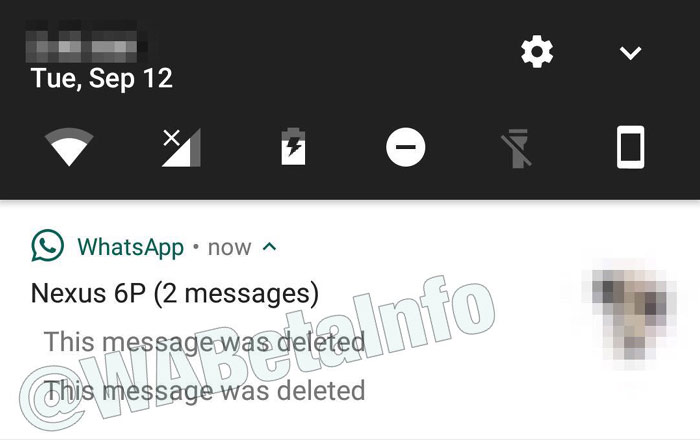 WhatsApp’s long-in-the-works recall feature has been talked about for months at this point, with no sign as to when people will actually have access to it. WABetaInfo now has some reassuring news for impatient users, claiming that the tool is on its way soon.

As per a series of tweets, WhatsApp is now actively testing the Delete for Everyone feature. Its server has finally started working, meaning that the platform can now successfully remove texts from both the sender and receiver’s phone. However, WABetaInfo cautions that this doesn’t necessarily mean that the option is currently available to the public.

He’s of the opinion that WhatsApp will remotely enable Delete for Everyone later. This could happen any day now for Android and iOS. The tipster additionally revealed that once a message has been banished, it’ll be removed from the Notification Center in both Android and iOS.

One factor which isn’t entirely clear is whether a WhatsApp text can be revoked even after a person has seen it. Rumors suggest that this won’t be possible, meaning people will have a short window of opportunity to get rid of their message before the individual or group on the other end of the line views it.

Rival chat apps like Telegram and Viber already have a recall feature embedded within their system, so WhatsApp will essentially be playing catch up. Being consistently late to the game doesn’t seem to have affected its popularity though, what with its 1 billion and counting daily active users.