WhatsApp’s Delete for Everyone feature finally starts rolling out

WhatsApp’s been working on a Delete for Everyone feature for quite some time now, with the hidden tool popping up frequently over the past few months. It seems the company is finally ready for it to go live as users across the world have begun reporting sightings of it in the official app.

WABetaInfo claims the rollout for WhatsApp’s recall feature will be very slow and hit iOS, Android, and Windows Phone. It’ll give Symbian a miss, so don’t try revoking a message for patrons of that particular software. Moreover, everyone involved has to have the latest version of the app for it to work.

Delete for Everyone will be visible alongside a new Delete for Me choice which is presumably the same as the earlier Delete option. The former works with all kinds of message types including texts, videos, GIFs, contact cards, photos, locations, and status replies. 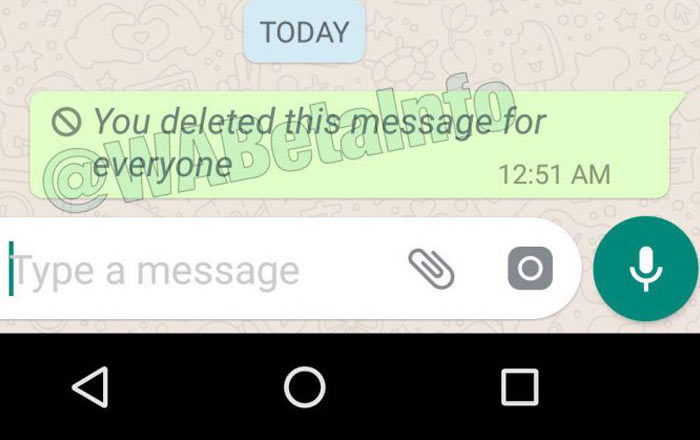 People will have to be quick about it though, since they’ll only have 7 minutes to decide whether they want to take back their mistake. Once a message has been revoked, neither them nor the recipient will be able to view it. This extends to notifications as well, where a text stating that ‘This message was deleted’ will be shown instead.

As for limitations, individuals won’t be able to recall communications sent in a Broadcast List. WhatsApp further won’t notify users as to whether the message they sent was successfully recalled or failed to get deleted.

You can try reinstalling WhatsApp to get hold of Delete for Everyone. This may or may not work though, so it’s just a waiting game at this point of time.