Gone are the days when sending a picture or video on WhatsApp and adding some context to it needed two different messages to be sent. The latest update to the Android version of the popular messenger application now lets you conveniently add text to your images and video clips right before you send them.

Earlier in the month, this feature was launched for the iOS version of the application, and it has now finally taken the Android leap. How the captioning works is fairly simple; when you’re sending a photograph or a video either as an attachment or a quick-capture, you’re confronted by a text bar right before you hit upload. 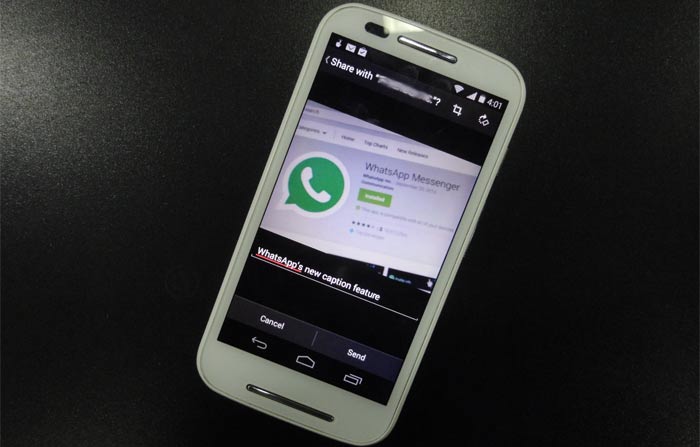 It’s in there that you can type in the words you want your media to accompany. For pictures, you can even use the facility to flip or crop them now. This update to WhatsApp for Android is available for download on the Google Play store. And as usual, it’s accompanied by a load of s bug fixes and improvements as well.

The other main attribute that’s about to hit the application soon is the ability to place and receive voice calls. Although official details on this feature remain slim, we’ve leant from recent developments that a release is right around the corner. WhatsApp was recently also blessed with better Android Wear integration to make the smartwatch experience much snappier than before.

WhatsApp is an extremely popular internet messaging application that’s available on a variety of platforms. Earlier this year, it was acquired by Facebook for the mind-boggling sum of $19 billion. Like we said, the update which lets you add captions to you images and videos is live now on the Play store.

Facebook
Twitter
Pinterest
Linkedin
ReddIt
Tumblr
Flip
Previous article
Google Now aims to be the awesome travel agent you never had
Next article
Windows 10 is so comprehensive it has skipped the number 9, says Microsoft