WhatsApp Web which is fast turning out to be the most convenient way to use the service for some users, has given up its exclusivity to Google Chrome finally. The service can now be utilized by those who have Mozilla Firefox or Opera browsers installed on their PCs as well.

Among the big guns, this just leaves Internet Explorer out of the fold. There’s no word on when the feature will be reaching Microsoft’s browser, but judging by its incredibly low usage statistics from around the world, we’re guessing WhatsApp Web won’t ever be taking the leap to this platform. 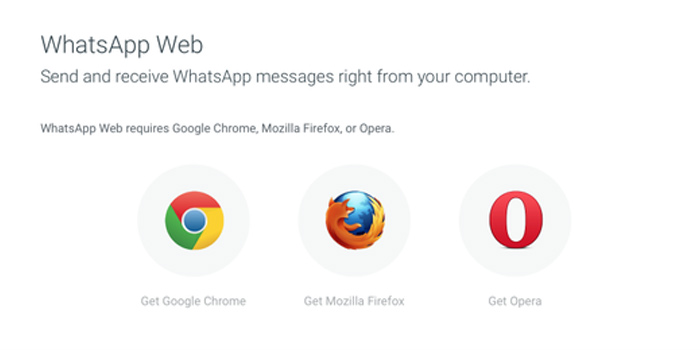 The new extension of the service was first introduced in the latter half of January this year. Much to the relief of those who’re bothered by constantly having to pick up their smartphones to reply to messages while they’re busy with their PCs, WhatsApp Web mirrors the entire messaging app in your browser, so that you can reply using your faithful old keyboard.

Not only that, the images and videos that are received through WhatsApp can also be viewed in your browsers, while many other features of the extremely popular app can be experienced as well. The web version of the service works with Android, BlackBerry and Windows Phone devices, with iOS gadgets having been left out of the purview.

In order to use the feature, you will need to have the latest version of the app installed on your devices. You must then choose the WhatsApp option from the app’s menu, and then open web.whatsapp.com in your browser. Once a QR code is scanned on the device, you will be ready to go.