It’s been a while since we’ve heard about the impending voice calling feature of WhatsApp, and reminding us of its existence again is a set of screenshots that has hit the Internet. This tells us that the long due facility could hit the app very soon, but there’s no official word on when that will happen exactly.

According to the source of these images AndroidWorld.nl (via GSM Arena), they have been found hidden inside one of the latest Android builds of the app. These pictures are also giving us a clear look at how the new WhatsApp functionality will actually look once it’s out. 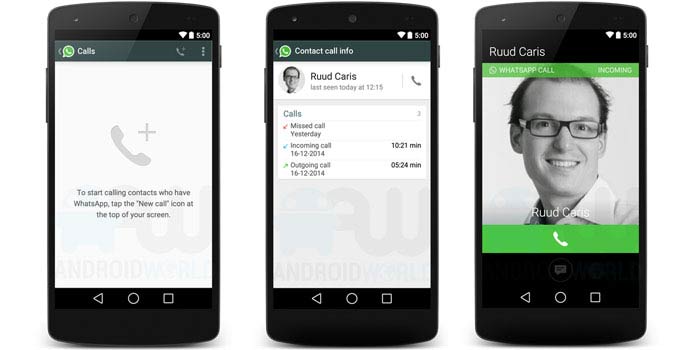 As can be seen in them, voice calling will come with its own distinct screens for dialing, call logs and contacts. This means that the usual chatting features of the app will remain detached from the new additions. One of the screenshots also gives us a clue about some sort of a call recording facility being present in the app.

The makers of WhatsApp have made it clear that they will be introducing voice calling to the application in 2015, but a definite timeframe for that hasn’t been mentioned by them. Back in September, we had received clues about its arrival through an updated version of the service’s iOS app.

Whenever it’s released, it’ll be interesting to see whether the benefits of the functionality will be available free of cost or will they be charged. The main WhatsApp is available free for one whole year, after which you’re needed to pay a nominal fee to keep using it. 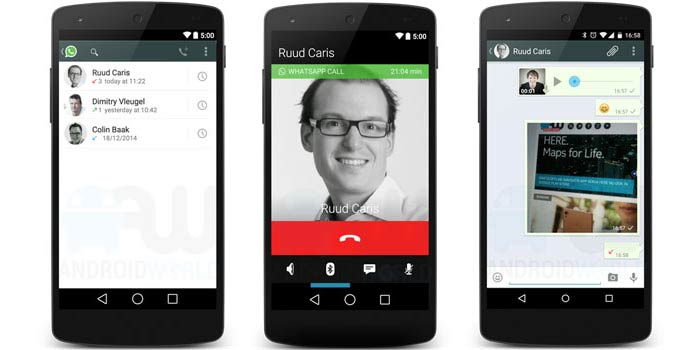 Let us now wait and watch when the developers of WhatsApp finally make the announcement about its voice calling functionality.