As more and more people keep jumping the WhatsApp voice calling bandwagon, it’s fast becoming the talk of the town. However, the feature is far from being a game changer, as it has only turned out to be disappointing to those who are using it, or rather trying to use it.

Voice calls can be made to your WhatsApp contacts using the Internet connectivity of your Wi-Fi, 3G or 2G networks. We have tried using the service on all three platforms, and have received awful results on them. Frustrating issues include echoes of our own voice, huge lags in voice reception and a lot more.

We would’ve understood if these problems existed on slow networks, but they were experienced even on 8Mbps and 5Mbps Wi-Fi as well as 3G. During one call we were hearing echoes of our own voice and during another, we were greeted by an ear-shattering disturbance that sounded as if an ostrich was being strangled.

Not to mention, there were tons of problems in establishing WhatsApp calls in the first place. The phone belonging to the person we were calling wouldn’t ring, yet they would be greeted with missed call notifications. And even when the calls did get connected, more often than not, we’d hear voice lags during our conversations. 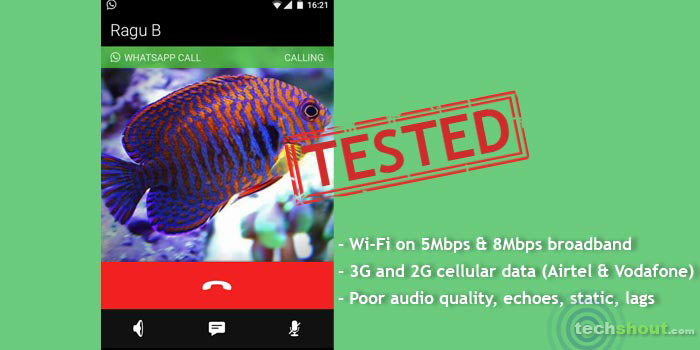 It seems as though WhatsApp has rushed into getting its voice functionality out to the public. To their credit however, the feature is still in its testing phases which has been indicated by the fact that it’s available on an invite basis. This also means there could be some improvements on the cards.

Let us now see how the WhatsApp voice calling functionality takes shape over a period of time.

Facebook
Twitter
Pinterest
Linkedin
ReddIt
Tumblr
Flip
Previous articleFacebook’s Messenger is now a platform of its own, more new features inbound
Next articleGmail for Android now unifies mail from all accounts into a single inbox