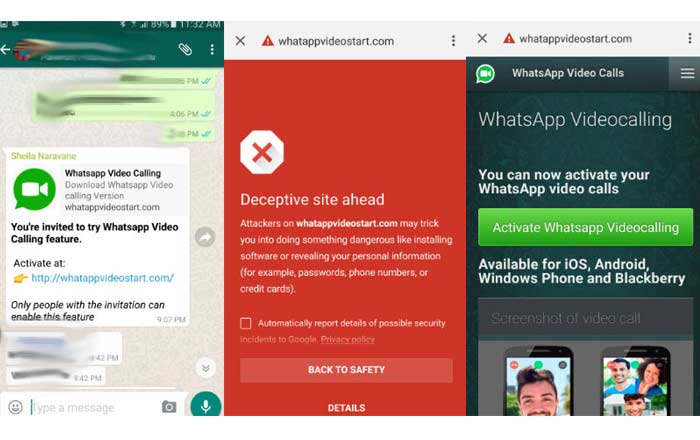 WhatsApp’s long-awaited video calling feature has finally started hitting users across Windows, Android and iOS over the course of the past couple of days. However, scammers are trying to take advantage of this rollout by sending out fake invites to dupe people.

To recall, WhatsApp had prevously beamed out its voice calling feature on an invite-only basis before throwing it open to the public. This time round, it’s chosen to go through the standard beta process followed by an automatic official rollout for video calling.

However, many users may not be aware of this change in strategy and fall for the malicious invite scam. The message has gone viral and could put several users at risk of attacks. Its text reads ‘You’re invited to try WhatsApp Video Calling feature’ followed by a link to a suspicious site. It even claims that only people with the invite can enable the tool.

Clicking on the link redirects victims to a legitimate-looking site which matches WhatsApp’s color scheme. It features a button to ‘Activate Whatsapp Videocalling’ and screenshots of the tool in action. Tapping on the button redirects individuals to a page asking them to invite more friends to WhatsApp.

It even namedrops an as-yet unreleased group video calling feature. Google Chrome notably warns people against visiting the website, calling it a deceptive site which could ask people to reveal private information or install dangerous software.

You can download the updated version of WhatsApp via the App Store, Play Store, or Windows Store.