For those of you who’ve updated to iOS 7, this WhatsApp overhaul may have seemed long overdue. It’s a good thing it’s here at last. We don’t mean to say the popular messenger tool isn’t compatible with older versions of iOS anymore, just that it now sports a redesigned iOS 7 user interface.

The app still runs with iPhone devices running iOS 4.3 or later versions of the OS. Apart from the new UI, several other interesting changes have been made to the application. You can have broadcast lists for mass messaging certain groups of people such as football friends, coworkers and so on. 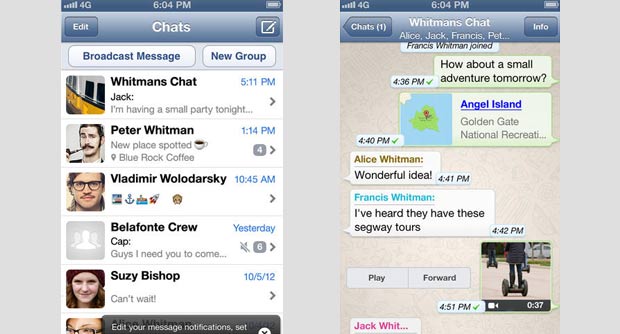 You’re saying this is the same as group messaging, right? Not really. In this case, all your work colleagues aren’t required to join your group titled, say Office Friends, in order to receive your message. The functionality basically lets you gather selected contacts in one cluster without them even knowing it and then send a text to each one in that circle in one go.

Users can crop photos before shooting them off and choose from additional notification alerts. The UI has been tweaked so that people can better manage their blocked list of contacts. The updated WhatsApp will stick to the device text size picked by users in iOS Settings, thumbnail images will appear larger than before and the ‘share location’ feature has been enhanced considerably.

Note that WhatsApp does not support iPod and iPad devices. It’s a free 18.6MB download and uses your internet connection to send or receive messages. Here’s the link to its iTunes page.