Voice calling over data is a feature that everyone has been expecting to come bundled in with WhatsApp for ages, but it still hasn’t materialized yet. An update to the iPhone version of the app however, has given us a clue that its launch isn’t too far away now.

The update in question was released on September 8, and asked about new permissions before it was installed. As revealed by NDTV Gadgets, WhatsApp requested to receive microphone access for beaming voice messages, recording videos with sound and making and receiving voice calls. 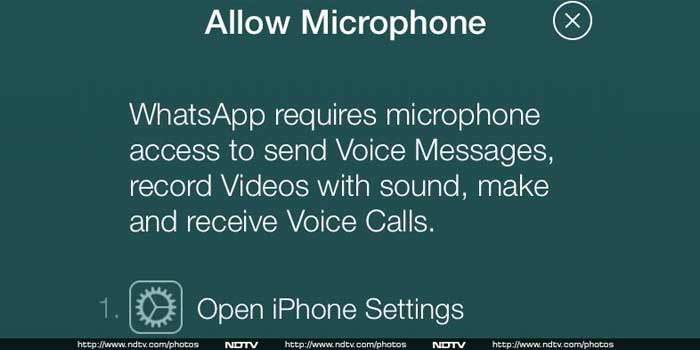 CEO of WhatsApp, Jan Koum had revealed that such a feature will be coming to the app sometime in Q2, 2014. We’re guessing that the company’s acquisition by Facebook has led to this delay in its release, but what’s good news is that you can expect the voice calling feature to roll out soon now.

Koum has also revealed that upon its release, this attribute will be doled out on both iOS as well as Android platforms. Additionally, it will even be granted to BlackBerry, Nokia and Windows Phone platforms later.

Recently, WhatsApp was updated by its developers to better support Android Wear devices. Among the new features was the ability to display stacked notifications which made it a very convenient experience to view the app’s alerts on smartwatches. Moreover, the recent update also granted the app the abilities to get a complete preview of received messages and reply to messages using the voice support of Android Wear devices.

We can sense that WhatsApp’s voice calling feature is right around the corner, and it shouldn’t take long for it to arrive on Android and iOS platforms. So stay tuned.