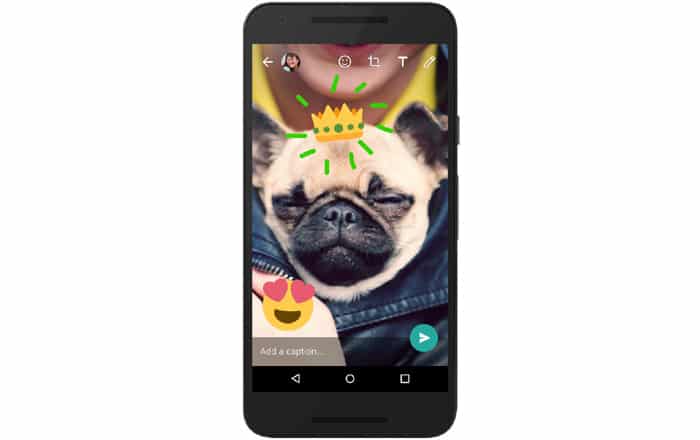 WhatsApp has begun rolling a brand new set of tools for its users to play around with so they can personalize their photos and videos with add-ons like emoji and text. Its newfound camera skills have begun rolling out to Android patrons and will make the trip to iPhone denizens soon.

WhatsApp’s update brings it ever closer to the Snapchat model of communication. Most of the fresh features have been part of the latter for a long time now, making the former yet another Facebook-owned property which decided to clone the ephemeral app’s abilities.

To recall, news of WhatsApp’s editing tools first broke out last month while the features were still in the beta stage. Now even regular users can take advantage of them. First-off, they can write or draw on top of images right after clicking them or after grabbing them from their photo library.

Also See: WhatsApp to comply with HC order after all

Emojis and text can be added as well. The second can be further customized by changing the font and color. WhatsApp’s introduced a few new skills to improve the snaps themselves as well. For instance, the front-facing flash feature brightens up a person’s screen, allowing them to light up selfies clicked in low light conditions.

WhatsApp’s also made some changes to the video recording process, allowing consumers to slide their finger up and down in order to zoom in and out. Moreover, they just have to double tap their phone’s display to switch between its front and rear facing shooters.

You can download the updated version of WhatsApp via the Google Play Store or App Store.