WhatsApp’s latest beta avatar for Android and iOS has a hidden feature which adds a new Status tab. The addition only shows up if you have a rooted Android smartphone or jailbroken iPhone.

The Status window is very similar to how Snapchat works, in addition to bearing a strong resemblance to Instagram’s Stories and Facebook’s Messenger Day feature. The new WhatsApp feature is distinguished from its current text-only Status update tool, which anyone can view, by virtue of letting users share photos and videos within a dedicated tab and choosing who can see them.

Consumers can also see whether the status has been delivered and seen by their friends by heading into info. The media they share can be customized with text, doodles and stickers, along with the other standard editing options like crop. There doesn’t appear to be any option to delete or limit the time period of these statuses as yet. 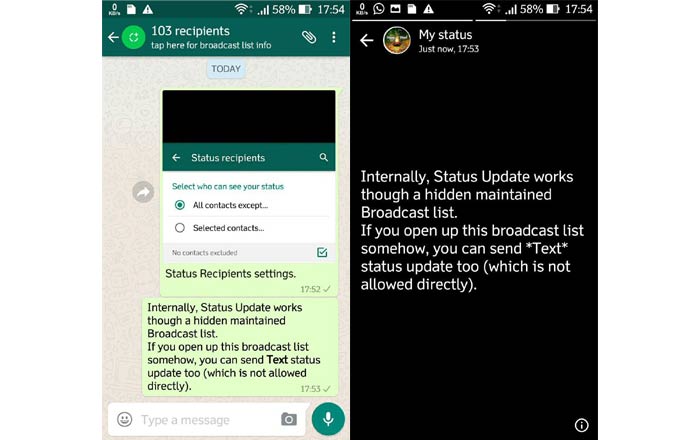 WhatsApp for Android beta version 2.16.336 further lets people forward text messages as a status. As per WABetaInfo, this ability is hidden within Broadcast lists. It shows up as a block of text with a black background.

Facebook seems intent on cloning Snapchat’s features across its entire portfolio of apps. It recently unveiled a number of new features within its flagship app under a revamped camera section, offering up tools like self-destructing photos, filters, and animated masks.

WhatsApp started rolling out video chatting support amongst its beta users in earnest a few weeks ago. Availability is random, with some able to access it and others left out.