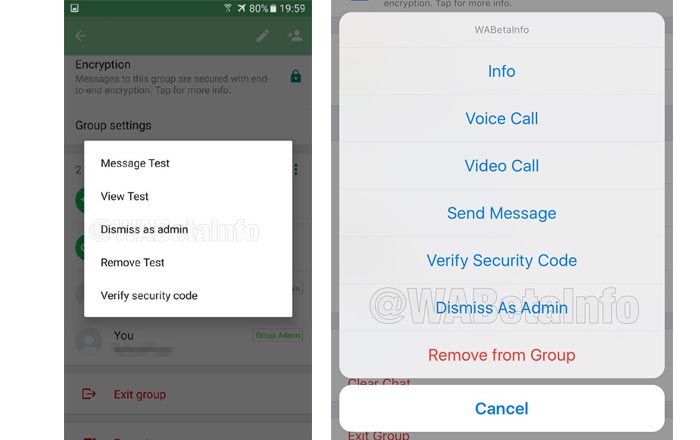 WhatsApp has got a new feature up its sleeve for group admins who want to demote other admins. While this procedure previously required administrators to remove the other person from the group and then re-add them, now it gets done in a few taps.

The option to ‘Dismiss As Admin’ appears in the Group Info section when an admin taps on the other administrator’s name. Once this is done, the latter will go back to being just a normal member of the group. There’s no need to remove and then add again.

WABetaInfo reports that the choice is showing up on both iOS and Android betas. It’s apparently being tested on the first and is enabled by default in WhatsApp for Android beta version 2.18.12 which can be accessed via the app’s Google Play beta program.

Another intriguing new feature which has popped up is a couple of security checks which prevent admins from removing or demoting the creator of the group. This hasn’t gone live for everyone on the latest beta version of WhatsApp, so it might take some time to arrive.

WhatsApp’s been concentrating on adding new tools to group chats for a while now. Group voice and video calls are incoming, as well as a ‘Reply in Private’ option. The latter lets users directly message people in a group. Admins are also set to get the ability to disable chat in a group, preventing all participants except for other admins to speak.