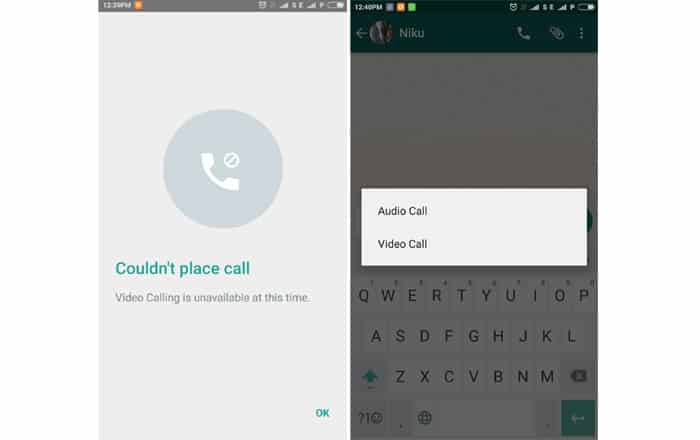 WhatsApp had bestowed the gift of video calling to its beta app followers just a few days ago. It turns out the present was meant to be played with for just a short period of time, as the company has now decided to take the feature off the table in its latest update.

This mysterious see-sawing probably means WhatsApp is still testing video calling and has decided the world isn’t ready for it yet. The changeover occurs when beta users upgrade from version 2.16.80 of the tool to version 2.16.81, downloadable via APK Mirror or the Google Play beta testing program.

Once updated, users won’t be able to see the short-lived Video Call option when tapping the phone icon in a chat window. To be clear, it appears that most people who tried to conduct a WhatsApp video chat were presented with a message informing them that the function was unavailable at this time.

Also Read: John McAfee at it again, falsely claims to have hacked WhatsApp

WhatsApp hasn’t said anything official about video calling yet. This will likely change soon enough, given that we know it’s definitely working on adding the feature to the app now. Earlier reports about it had relied almost entirely on leaks, with the most recent one revealing that the brand is generating translations for the tool in different languages.

Other than video calling, WhatsApp may also be blessed with functions like a callback button, ZIP file sharing and voicemail support soon. There are also rumors that the firm is planning to introduce a new group invite system which will allow members to send out invitations to join a group via links, QR codes and NFC tags.