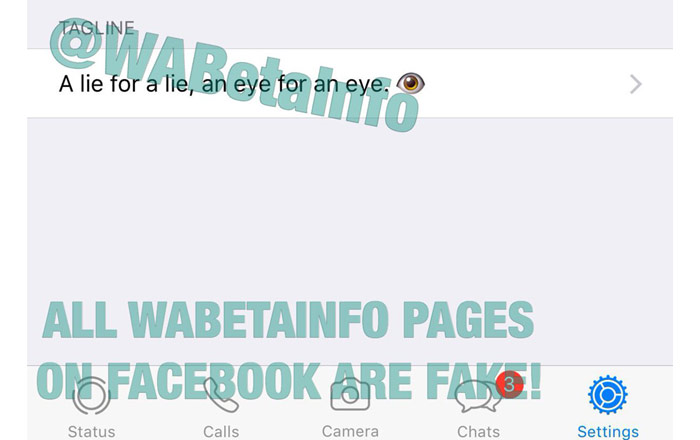 WhatsApp’s all-new Status tab has gotten a mixed reaction from the public so far, with some embracing the change and others longing for a return to the text-based statuses of yore. The latter group may have something to cheer about now thanks to news that the app is working on a Tagline feature.

Tagline has shown up has a hidden facet of WhatsApp beta version 2.17.6.21 for iOS and version 2.17.82 for Windows Phone. It’ll probably make an appearance on the Android beta sooner or later. The addition works exactly like the old Status tool, letting users put up a message with text and emojis which can be seen on their profile.

However, it appears Tagline is still undergoing testing since WABetaInfo reports that the add-on has reverted back to being called Status in the latest iOS beta. Interestingly, the tipster also claims that WhatsApp is working on a second app called WhatsApp for Business.

WhatsApp for Business is apparently going to target small enterprises which employ less than 10 people and are on the lookout for a mobile client. The goal would be to help the firms manage customer contact lists or multi-agent support in an easier manner. It may begin testing in India at some point this year.

The leakster further dishes out information on a new feature called Click to Chat. The facility lets people talk to someone without having to save their number in their handset’s contacts. It does this by creating a link which allows users to start a conversation with someone as long as they have that person’s number.

The URL triggers a chat window to open up and works via both the mobile application and the WhatsApp Web desktop client. You can check it out here and get detailed instructions on how to use it here.