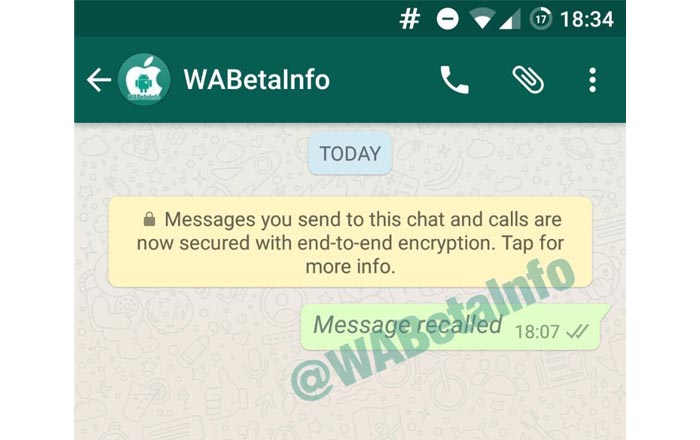 WhatsApp’s recall feature may soon become a reality going by a series of tweets issued out by frequent leakster WABetaInfo. The tool has been in testing for months and may finally be ready for show time.

As per WABetaInfo, WhatsApp’s going to remotely enable the recall function in version 2.17.30+ for iOS. It should be spelled out that version 2.17.30 has already been rolled out. The tipster later wrote that he included the ‘+’ in his earlier statement since he doesn’t want to exclude the feature arriving in a future update.

He went on to claim that 2.17.30 is perfect for switching on recall, suggesting that WhatsApp is ready to roll it out to the public at any given moment. He didn’t say anything about Android, but the ability will likely make its way onto that platform as well.

As for what exactly a recall tool will allow, past leaks have indicated that it’ll let users take back messages which have been sent but not read yet. This would make it easier to do things like correcting embarrassing typos.

WABetaInfo further asserts that WhatsApp is in the process of bringing back the Contacts tab that was eaten up by the new Status tab. Interestingly enough, it seems the Status section will house Contacts. There could be a ‘New Contact’ option added within the same window as well, in addition to a ‘See all’ button that’ll show all muted statuses.

Finally, WABetaInfo believes that Status is coming to WhatsApp Web soon. The tool behaves just like its app counterpart, allowing users to see and reply to statuses.