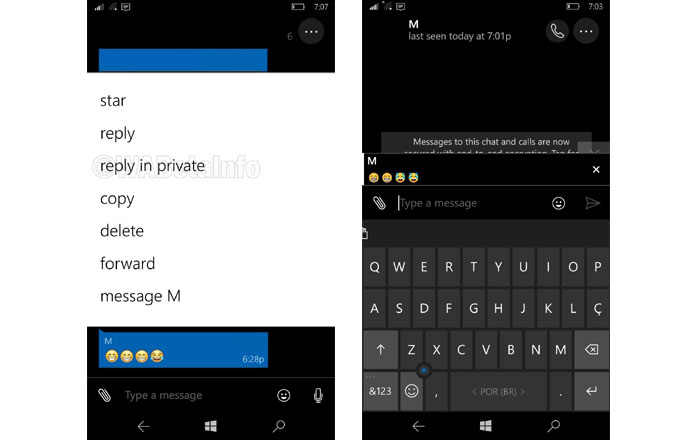 WhatsApp is preparing a brand new ‘Reply in Private’ feature for its user base, allowing people to send a direct message to someone on a group. The add-on was first spotted by WABetaInfo in the Windows Phone beta version of the app.

As per his tweet, Reply in Private was wrongly enabled in WhatsApp for Windows Phone beta version 2.17.342, before being disabled in version 2.17.344 and then once again implemented in version 2.17.348 of the application. It’s clear the tool is under development and could be rolled out soon across all platforms including Android and iOS.

WABetaInfo further noted that Reply in Private was having some problems in Windows Phone. For instance, the option popped up in personal and group chats when it should be restricted only to the latter. He managed to grab some screenshots of the feature in action.

As per the images, a person will simply have to hold down on a message in a group to access Reply in Private among the other options that pop up. Once it’s been selected, the text gets quoted and the window automatically transitions to the friend being replied to.

Of course, anyone can just head to that particular friend’s chat window and talk to them discreetly. The key advantage here is time since people won’t have to hunt around for that conversation, plus the message gets quoted so the other person knows what they’re talking about immediately.

Reply in Private could also be useful when the two people involved don’t know each other and haven’t had a one-on-one conversation yet. We’ll let you know when it goes official.