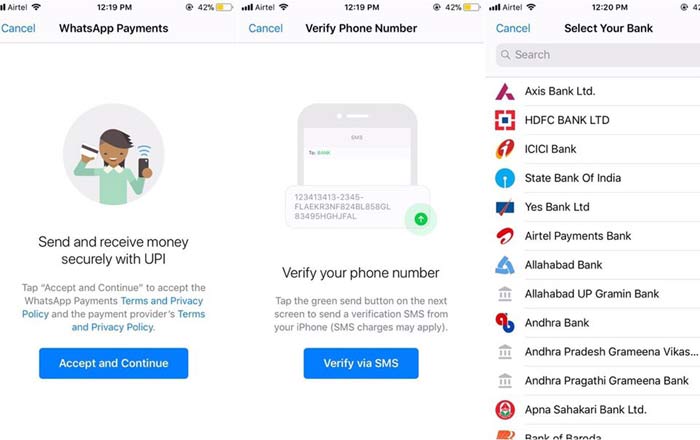 WhatsApp’s payments feature is finally emerging from its cocoon into the phones of Android and iOS beta testers across India. The long-in-the-works UPI-based platform began slowly rolling out to them a couple of days ago.

Beta participants on WhatsApp for Android version 2.18.41 and WhatsApp for iOS version 2.18.21 should be able to see the new Payments option. It’s been placed in the Settings menu below Notifications and can be accessed by tapping on the attachments button in a chat window.

WABetaInfo has noticed that many of the beta testers who got WhatsApp Payments are on Airtel’s network, but admits this might just be a coincidence. It should be noted that both the sender and receiver will have to activate it for transactions to be possible.

Quite a few banks support the platform including ICICI Bank, HDFC Bank, Axis Bank, Airtel Payments Bank, and State Bank of India. It seems users will have to sign up for UPI if they don’t have an account yet. They’ll also have to verify their number through an SMS before they get to select their bank.

Sending money like a person would send a photo could be incredibly convenient for the millions of people using WhatsApp in India. Rivals like Paytm and MobiKwik are already well established, but the chat app has the advantage of in-built reach.

TechCrunch reports that the company will announce the feature in India after the beta testing phase is over and done with. Till then, you can try your luck by downloading the Android beta version via APKMirror.