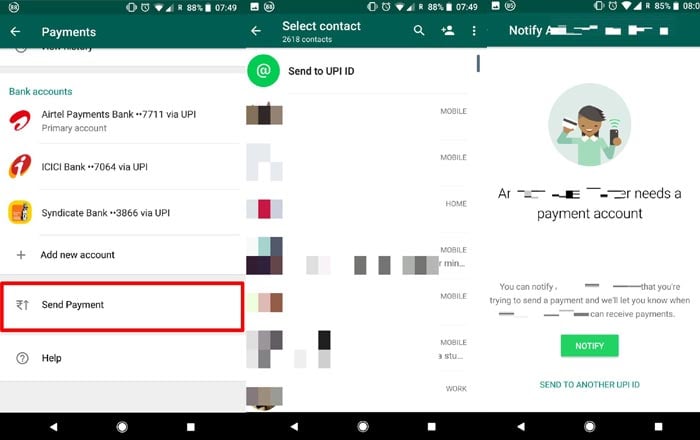 WhatsApp Payments has been around in India for about a month now and is still not accessible by everyone. It seems the company is still tinkering around with the platform as it recently rolled out a couple of changes to the interface, as noted by Twitter user SG.

To recall, WhatsApp Payments allows users with a UPI ID to send money to someone else with a UPI ID. Up till now, the system required a person to head into a chat and tap on the attach button to send cash. This is fine for when the conversation is in progress, but can be cumbersome for those who directly want to send money.

WhatsApp appears to have heeded those complaining about this by introducing a new ‘Send to UPI ID’ option within the Payments window (accessible via Settings > Payments > Send Payment). The option lets users skip the hassle of finding a particular conversation since they can just enter the other person’s ID or select them from a list of contacts to send cash.

Also Read: WhatsApp for iPhone users now have 4096 seconds to delete a text

This also helps circumvent circumstances when the recipient’s UPI ID isn’t linked to a contact’s phone number or they’re not on WhatsApp in the first place. The company was criticized by rivals like Paytm who pointed out that the firm didn’t play nice with UPI’s interoperability requirement, making the platform come across as a closed garden only for WhatsApp users.

Allowing people to pay someone directly through their UPI ID addresses these concerns to a certain extent. WhatsApp has also added a new Notify button for users who are trying to send money to someone without a UPI account. Once the other person gets notified and sets up an ID, the original sender gets a notification that they can now send money.