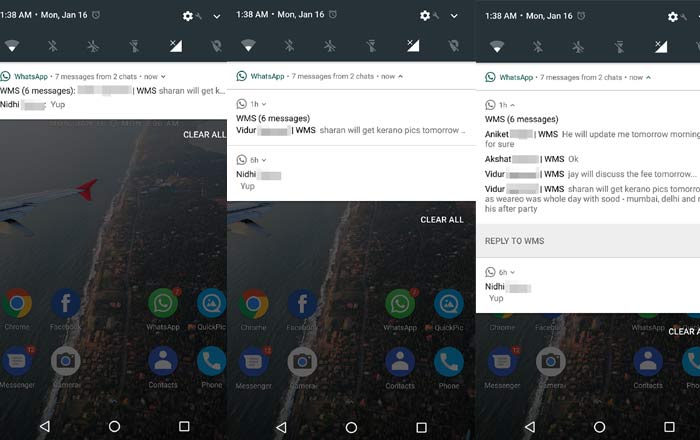 Android 7.0 brings a ton of improvements all around, with one of its key enhancements being the smoother notifications system that comes along with it. However, WhatsApp hasn’t implemented the latter feature, failing to follow Google’s rules regarding alerts in Nougat.

However, this may soon be at an end as WhatsApp appears to have adopted Nougat’s notifications guidelines at last. The change can only be accessed by beta users of the app so far. Previously, the application showed people only the latest message in a chat and dismissed the Quick Reply tool when they got a new missive from the same exchange.

The Nougat-enhanced system in WhatsApp for Android beta now showcases all the recent messages in a conversation instead of just the newest one. Furthermore, Quick Reply stays in place even after new texts come in. If an individual gets more than one missive from multiple chats, they’ll all be bundled into one notification.

This alert can be unbundled by the user who can then reply to each discussion separately. The shift improves the notifications system for Android Wear devices as well, making messages easier to read and respond to. The modifications will probably be welcomed by multitasking consumers who don’t want to jump into and out of WhatsApp constantly.

WhatsApp’s changes appear to work with smartphones running both Android 7.0 and 7.1.1 Nougat. You can check them out by downloading version 2.17.13 or above of the beta app via APKMirror. You can alternatively sign up for the applications’ Play Store beta program.