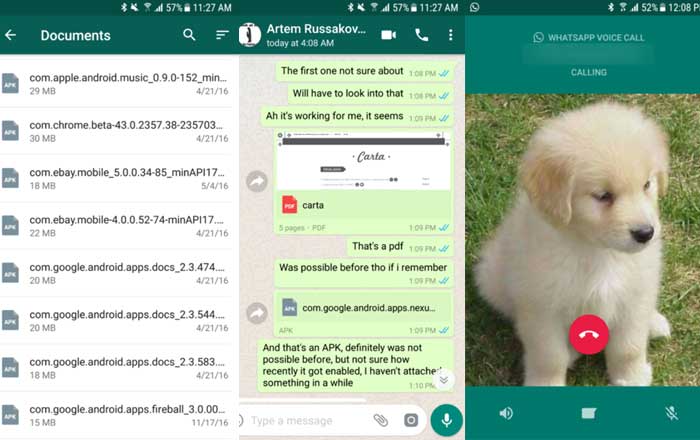 WhatsApp has gotten hold of a number of changes that will probably have a big impact on the way people interact with the app. The biggest one of all is the ability to share a wider range of file types than before.

So far, WhatsApp has kept things restricted to sharing documents and compressed photos with file extensions like pdf, xlsx, and docx. Now it seems the company is letting iOS, Windows Phone, and Android users send out APKs, ZIPs, and uncompressed JPEGs via the same Attach option as before.

The maximum size limit for iOS is 128MB, Android is 100MB, and WhatsApp Web is 64MB at the moment, but this could change with the new regime. WABetaInfo claims that the firm is still experimenting with the feature and is rolling it out slowly to everyone.

Over on the beta side of things, WhatsApp for Android testers should see a new bundled media album format which gathers all the media shared in a conversation in one place instead of housing each in a separate bubble. iOS patrons got this new functionality earlier this month.

Once tapped, it showcases all the photos and videos in a separate window, getting rid of the clutter that comes when someone shares a bunch of photos at the same time. Finally, WhatsApp has revamped the look of the call screen, requiring you to swipe up to pick up a call rather than sideways. You can download the Android beta version of the app via APKMirror.