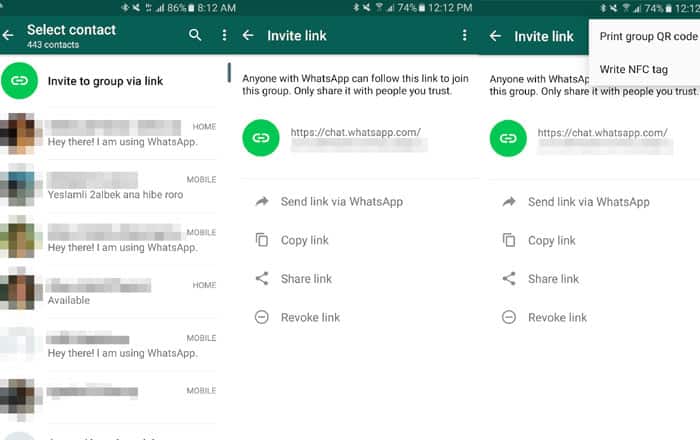 WhatsApp’s beta version has just gotten a major new feature in the form of shareable public group links. The feature allows administrators to invite someone to a group by forwarding them a link which they simply have to tap to join.

The new feature was first spotted back in June this year in WhatsApp’s iOS and Android beta avatars. While the initial version of the tool was only partially workable, it now appears to be fully functional. Admins will now see a ‘Invite to group via link’ choice when they try to add a new member to the group.

Selecting the option will open up a new window where they’ll be presented with a unique link. The person in charge can choose to send the link via WhatsApp or copy, share and revoke the url. The last is presumably to stop people from joining the gathering through the link.

Furthermore, tapping on the overflow menu presents two more options namely Print group QR code and Write NFC tag. Both make it easier to join a WhatsApp group since a person will just have to scan the former to do so, rather than the admin having to manually extend an invitation to them.

This could prove to be especially useful for organizations and businesses since anyone would be able to join a group without having to go through the trouble of getting in touch with the administrator first. Of course, this may also lead to unwelcome participants getting access to a group.

Other than group invite links, WhatsApp for Android has also received a quick forward button right next to any shared media within a chat window. iOS users have already gotten that particular tool in iOS 10, so it shouldn’t be too long before the former gets it in the official app soon.

You can download WhatsApp for Android’s beta version via APKMirror.