Important messaging service WhatsApp has been absent without official leave since yesterday from the Windows Phone Store. Although no reason for this was provided earlier, the company later revealed that ‘technical issues’ are the reason why the app cannot be downloaded on phones running Microsoft’s mobile OS.

Windows Phone Central was quick to report yesterday when a search for the word Whatsapp on the WP Store started fetching the result, ‘We couldn’t find a match. Try a different spelling or search term.’ When the app is searched for on the official website, it is indeed found but affixed with the message ‘This app is no longer published.’ 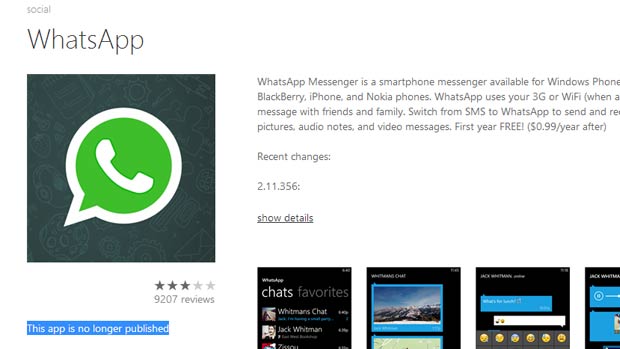 This is not letting new users install Whatsapp on their phones. However, those who already have the app on their devices can still use in to satisfy their messaging needs. Other versions of this cross-platform tool appear to be up and running as usual.

Following the whole fiasco, WhatsApp Inc. issued a statement which revealed ‘technical issues’ to be the reason for its removal from the Windows Phone Store. The company has apologized for the ‘temporary inconvenience,’ and has assured that it is working with Microsoft to solve the problem quickly.

Like we said, those who already have WhatsApp installed on their Windows Phone devices can still use it right now.