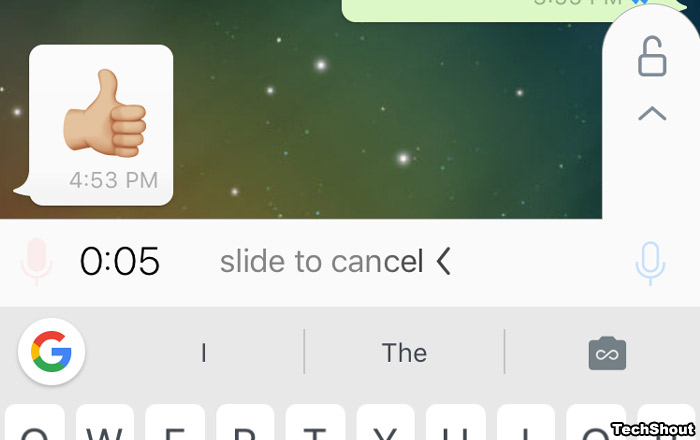 WhatsApp’s added 2 new features to its iPhone avatar, one a complete surprise and the other a long-expected addition. Neither has made their way to the Android version yet, but it’s likely just a matter of time before they do.

Starting off with the anticipated change, WhatsApp is now making it easier to record long voice messages. Previously, you’d have to tap on the microphone icon and keep applying pressure to it while rambling on. This is fine for short recordings, but becomes cumbersome for lengthy ones.

The procedure is a bit different now. Once you start holding down on WhatsApp’s microphone symbol, you’ll see choices to either slide left to cancel or slide up to lock. The former will end the recording and the latter locks it so that you can take your finger off the screen and speak to your heart’s content.

WhatsApp for iPhone version 2.17.81 also brings with it the facility to watch YouTube videos directly within a chat window after tapping on the link. Picture-in-picture allows you to keep the video running even while navigating to another conversation.

Unfortunately, while WhatsApp’s official App Store changelog mentions both the voice recording and built-in YouTube player, the latter doesn’t appear to be active yet. WABetaInfo believes the feature is disabled at the moment for unknown reasons. The company might enable it via a server side switch later.

Meanwhile, you can download the latest version of WhatsApp for iOS via the App Store.