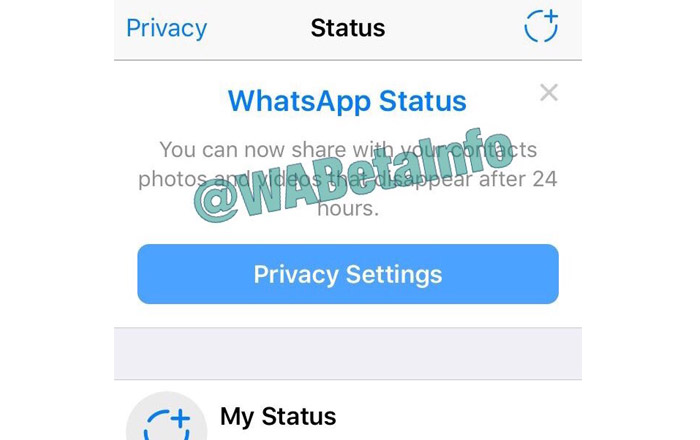 WhatsApp’s been tinkering with its Status tool for a while now, stretching all the way back to November 2016 when it made changes to its Android beta to add a new Status tab. Now it seems the company is revamping the feature in its iOS beta as well.

As per WABetaInfo, WhatsApp is planning to allow iPhone users to upload photos and videos as their Status to share with their contacts for 24 hours. After this period of time passes, the media will disappear automatically. The feature sounds similar to Snapchat’s Stories tool.

Facebook has been fairly active in trying to clone Snapchat’s features across its portfolio of apps. WhatsApp’s take on the ability may or may not prove to be popular among its consumer base. Individuals are currently limited to text-based statuses, so the new addition might be a welcome change of pace.

While not specifically mentioned, it’s likely that WhatsApp will let users limit the number of people who can view a Status. Previous iOS betas have allowed for this, letting them choose between sharing the Status with everyone or selected contacts.

WABetaInfo claims the updated Status feature was present in WhatsApp for iOS beta 2.17.4 and above. That specific version has now gone official with minor updates but no changes to Status. The leakster had earlier asserted that a person’s friends would get alerted if they changed their status.

Other assorted leaks had suggested that users could gain the ability to reply to statuses. We’ll let you know as and when WhatsApp decides to roll out its new Status tool officially.