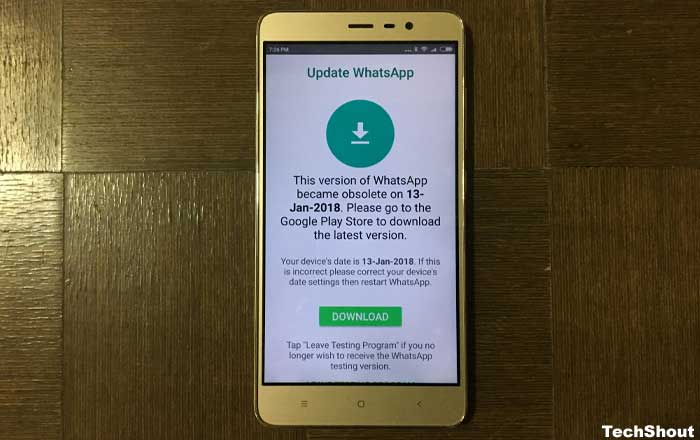 WhatsApp users in India woke up to an unusual problem on January 13 when the app began displaying a strange message telling them that their version of WhatsApp had become obsolete. The issue got highlighted by a number of people on Twitter, with almost all of them being Xiaomi owners.

We encountered the problem as well on a Redmi Note 3 and Redmi Note 4. The notice asks the affected user to head to the Google Play Store and download the latest version. However, there is no new upgrade to be downloaded, throwing everyone for a loop.

Making things even stranger is a sentence at the end which tells individuals to leave the testing program if they no longer wish to receive the testing version. This just added to the confusion since most of the people who were facing the problem weren’t on the beta platform.

WhatsApp later issued a statement on the matter, blaming the way its app is distributed which apparently isn’t under its control. The company’s currently working on a permanent fix. There are a couple of workarounds to get the application back on track without losing any data.

The most popular one involves going to WhatsApp’s website and downloading the Android APK directly from there. Installing this will instantly get things back to normal. Users will have to enable ‘Allow installation of apps from unknown sources’ inside Settings > Additional Settings > Privacy for this to be possible.

The other solution has been provided by Xiaomi itself. Owners have to open the pre-installed Mi Store App named ‘Apps’ on their smartphone, search for WhatsApp in the search bar, and then tap on the Update button. They can alternatively choose to go to Tools > App Update in the Apps store and select Update all.