WhatsApp for Android’s beta avatar has just gotten a slew of new updates in the guise of stickers, video zooming and drawing abilities. As is usually the case, there’s no way to know whether the features will make its way to the official version or iOS.

Starting off with WhatsApp’s newfound photography skills, you can now zoom in and out while recording videos by sliding your finger up and down, just like Snapchat. The application has also come up with a neat front-facing flash tool which uses your phone’s screen to light up your selfies in the dark.

According to Android Police, the two new additions only come to life if you utilize WhatsApp’s in-built camera rather than your handset’s native one. This essentially means you’ll have to select the lens icon in the text box at the bottom of the conversation window instead of the attachment icon from the top half of the screen and then the shooter. 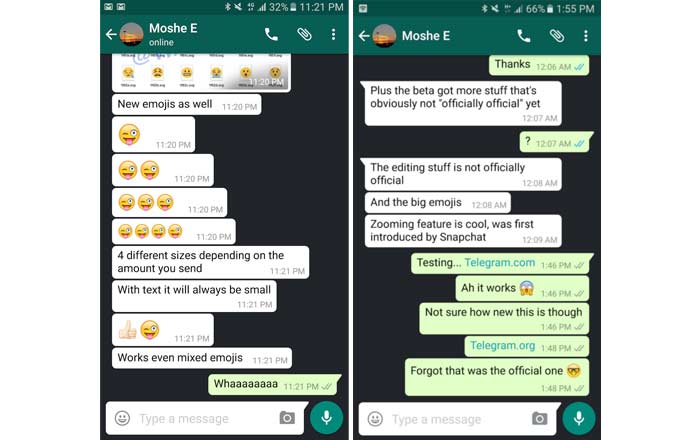 This requirement also holds true for the other new features. Photos captured through WhatsApp’s camera can now be embellished with stickers, text, annotations and drawings in a wide variety of colors. Stickers have become extremely popular in recent times, with everyone from Snapchat to Twitter implementing them.

It makes sense for WhatsApp to jump onto the bandwagon as well since there seems to be a number of people who want to decorate their images with graphics. All the labels and text can be resized, moved, rotated and undone. Moving on to the next big change, the company has altered the scale of its emojis.

Instead of just regular-sized emoticons, the new system utilizes several different dimensions namely large (one emoji), medium (two), small (three), and normal WhatsApp text-sized (four and above). You don’t even have to use the same emoji for this to be possible, so you can mix-and-match to your heart’s content.

Interestingly, it appears that WhatsApp has lifted the rumored ban on Telegram links which came to light last year. You can get the latest version of the beta app via APKMirror or by joining the tool’s Play Store beta program.