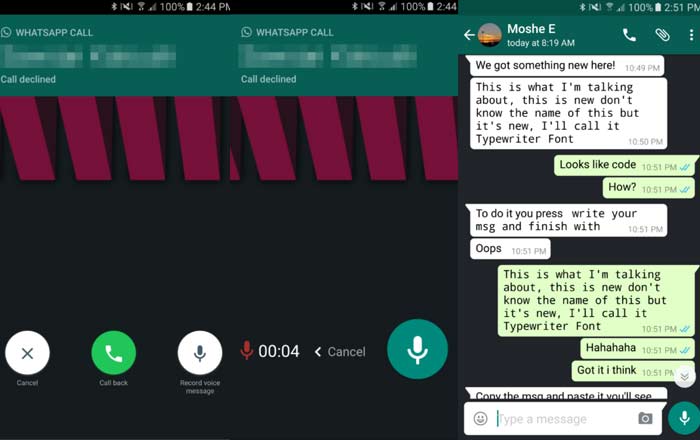 WhatsApp has just gotten a couple of interesting new features in its beta avatar which makes voice calling a tad more convenient than before. The chat app has also added a new font to add some variety to your texts.

WhatsApp for Android patrons who happen to be members of Google Play’s beta testing program or are APK enthusiasts will now see a big change in their voice calling interface. If their call doesn’t get picked up, a new Call declined screen pops up and presents them with three different options on how to proceed.

WhatsApp users can either choose to Cancel, Call back, or Record voice message. The first returns them back to the conversation window, the second acts as a redial button, and the third lets them leave a voicemail without having to leave the interface. The last appears as a regular voice message within the chat window.

As such, it can be done using the current voice record option as well, though the new tool cuts down on the hassle of having to exit the calling screen and doing it separately. The new features have only been spotted in the Android version of the app so far, with the no indication yet of when it’ll make the leap over to official status or iOS.

Speaking of beta-only features, WhatsApp has added a new font which the internet is calling FixedSys. It was first highlighted by a Reddit user who called it that, though there’s no indication that the company itself has given the style that name. It’s commonly used by developers for writing code, spacing and widening out letters.

You can try it out by adding three grave accents (`) before and after a word or sentence. For example, typing ` ` `Hello` ` ` will trigger the switch and make your text stand out. You can download the latest version of WhatsApp for Android beta via APK Mirror.