Your wait for voice calling on WhatsApp for iPhone is finally over as the much awaited feature has gone live and an updated version of the application is already available for download through the official channel. What’s more, there are a few other new capabilities bundled with the latest release.

We’ve already gotten a good look at what the app will tag along as the features have been already available to users with jailbroken devices. The updated WhatsApp for iPhone application is listed as version 2.12.1. It brings the same voice calling capabilities which have been available to everyone on Android since March. 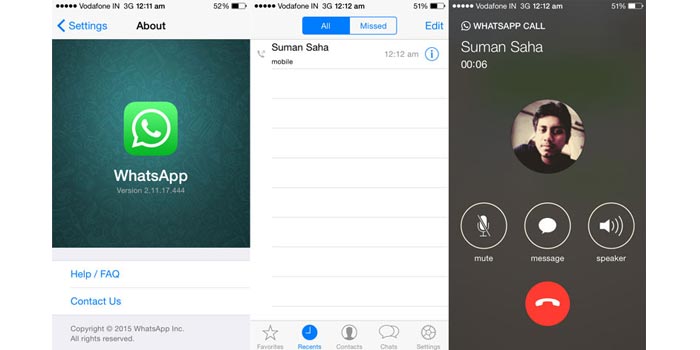 With the latest application installed, you’ll now see new elements in the UI. All calls made and received will be listed under the ‘Recent’ tab and you’ll be able to start a new voice call from within a chat or through the ‘Contacts’ tab directly. As you already know, the VoIP service is absolutely free over cellular (2G, 3G and 4G) and Wi-Fi, but you will incur data charges.

Also, there’s the possibility that you may have the latest WhatsApp for iPhone application installed, but still not able to access voice calling. And this is mainly because the feature is still rolling out. The company notes that it will be made available to everyone over the next several weeks. Coming to the other improvements in the new update, the changelog notes that support for sending multiple videos at the same time has been added.

Also read: Relax! WhatsApp voice calling is in the works for Windows Phone

Additionally, contacts can be edited straight from the application itself and there’s now a quick camera button in chats so that you can snap up images or capture clips in a jiffy. WhatsApp is now compatible with iOS 8 share extension which means that you’ll be able to share stuff like links, images and videos from other apps through the service.

Head over to the Apple App Store to download the latest WhatsApp for iPhone update to access voice calling.