WhatsApp for Android gets updated on Play store with new features

Lots of beta versions of WhatsApp have been surfacing over the course of the last few weeks, adding newer features to the instant messaging service. It seems all those traits are now ready for primetime, as the developers have finally brought them onto the Play store version through the app’s latest update.

WhatsApp releases new features via beta versions on its official website first. These are downloaded by a very small number of people who act as testers. It’s after these initial tests that a final version enters the Play store. 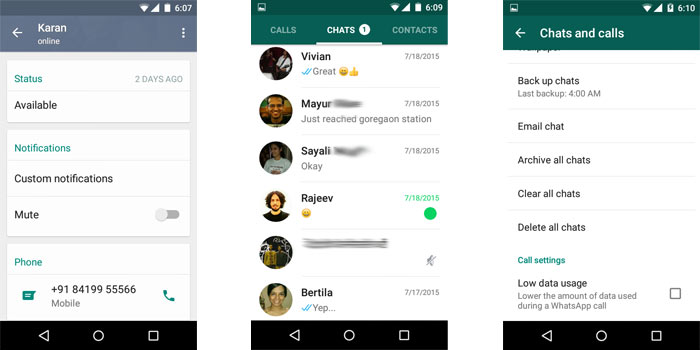 And then there’s the ability to mark chats as unread or read by long-pressing them, and the facility to set a low data usage option by entering Settings. Ethnically diverse emoji as well as the middle finger emoji have landed in the Play store version finally.

Upon receiving a contact card, if the particular person is already on WhatsApp, you can quickly message them without needing to save their contact first. Lastly, the latest version of the instant messaging app also brings with it support for Urdu and Bengali languages. However, even after all this, Google Drive backups still aren’t enabled.

The newest version of WhatsApp for Android can be grabbed now through the Google Play store. The version is being rolled out in a gradual manner, so don’t be alarmed if it hasn’t showed up for you as yet.