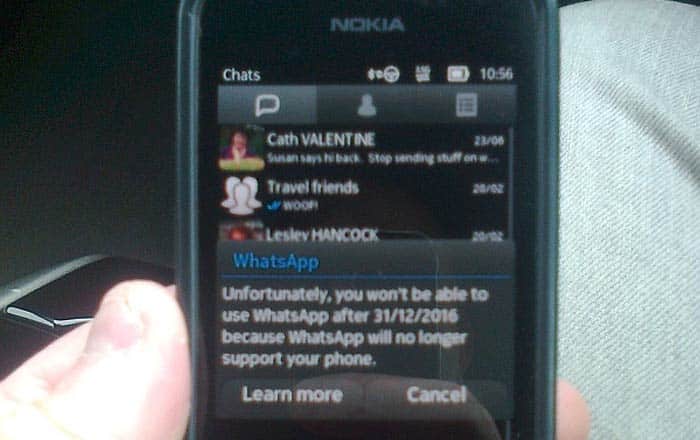 WhatsApp had made a lot of people unhappy with the news that it was planning to cut off support for Nokia and BlackBerry devices by the end of 2016. The popular chat application has now fixed a date for this event, so users can officially start counting down the days until they’re forced to give up the app or switch to a newer OS.

According to All About Symbian, WhatsApp has begun sending a notification to Nokia users all over the world informing them that they won’t be able to use the app after 31 December since it’ll no longer support their phone. It’ll probably be the cutoff date for the other abandoned platforms as well.

This list includes the Nokia Symbian S60, Nokia S40, Android 2.1, Android 2.2, Windows Phone 7.1, and BlackBerry OS. WhatsApp had justified the decision at the time by pointing out that the tech landscape has completely changed since it first made its debut in 2009.

Nokia and BlackBerry had ruled the roost back then with a 70% market share. The two are nowhere to be seen now, with the former rumored to be planning a comeback with its own Android smartphone and the latter similarly looking to release mid-range Android offerings after the failure of the Priv.

Loyal patrons of Nokia and BlackBerry will now be forced to jump ship to Apple, Google or Microsoft if they want to keep in touch with their contacts through WhatsApp. One of the other major reasons why the company decided to shed the older platforms was because they don’t offer the kind of capabilities required to expand the application’s features in the future.