WhatsApp’s got some interesting features cooking up for its users, potentially allowing them to revoke and edit texts after they’ve been sent. It might also make it easier for people to format text.

According to WABetaInfo, WhatsApp Web version 0.2.4077 features many improvements for the recall tool, letting individuals unsend messages within 5 minutes. However, the account also states that the feature is disabled for now. The revoke feature actually came to light in January this year in the Android beta version of the app.

WhatsApp is presumably working on the ability at the moment and plans to release it sometime in the future, hopefully soon now that it’s popped up in the company’s Web avatar as well. There was also an edit feature in the Android beta. The option could be accessed by long-pressing on a sent text and tapping on the three dots icon to choose the Edit button.

Both revoke and edit will likely prove to be very popular if released to the public, allowing anyone to fix autocorrect errors in a jiffy instead of sending out another message correcting the mistake. It’s not clear as of now whether recall will work with media such as photos and videos as well. 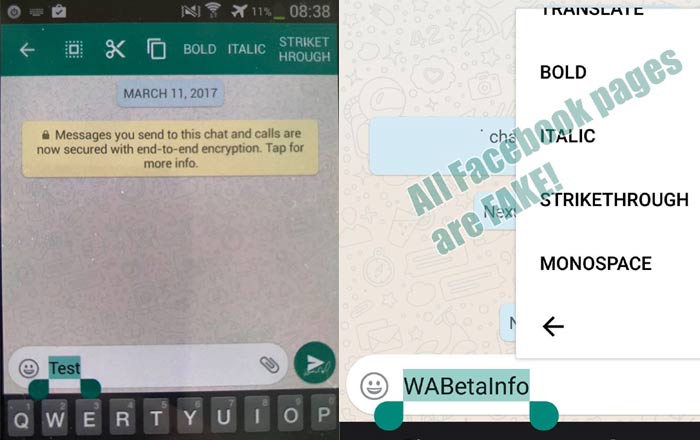 As for other upcoming features, the latest WhatsApp for Android beta has added a useful new tool in the form of font shortcuts. The official version has had stylized formatting options such as bold and italics for quite some time now, but requires people to use asterisks and underscores to achieve the effect.

Version 2.17.148 of WhatsApp’s Android beta makes things much simpler with the choices presented next to the other editing options on top or after highlighting the text. Not everyone on the beta has access to the change, but you can try your luck by downloading it via APKMirror.