WhatsApp’s got a ton of new features hidden away in its iOS and Android beta avatars which could prove very useful if and when they get released officially. One involves being able to revoke messages, the second editing them, and the third sharing your location with others on a real-time basis.

The first two have only appeared in the WhatsApp for Android beta so far and are disabled by default. Version 2.17.25 brought the revoke tool. It lets you recall a message after it’s been sent but presumably before it’s been seen by the recipient. The app currently just lets you delete a missive on your end but doesn’t offer any tools to take a text back.

WhatsApp for Android beta 2.17.26 introduces another major change in the form of an edit option. It looks like you’ll be able to long-press on a sent message and then tap on the three dots icon above to bring forth the Edit button. This could be a game changer for the application, paving the path for people to fix autocorrect mistakes and various other errors. 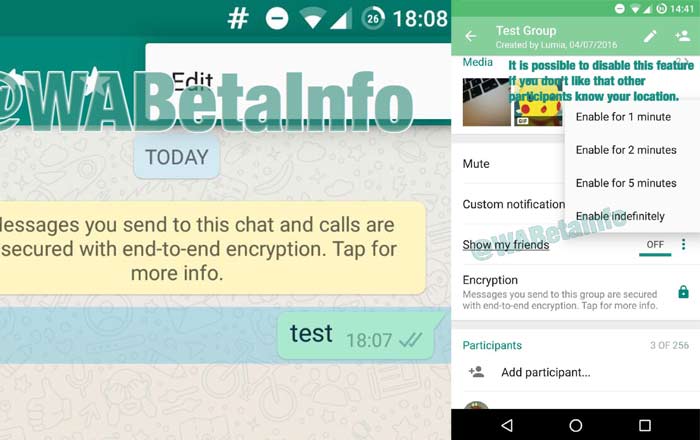 Finally, iOS version 2.17.3.28 and Android version 2.16.39+ of WhatsApp add a live location sharing feature. The Show My Friends tool will apparently let you beam out your position for a minute, 2 minutes, 5 minutes, and indefinitely. It’s meant to be used in groups to track the real-time whereabouts of participants.