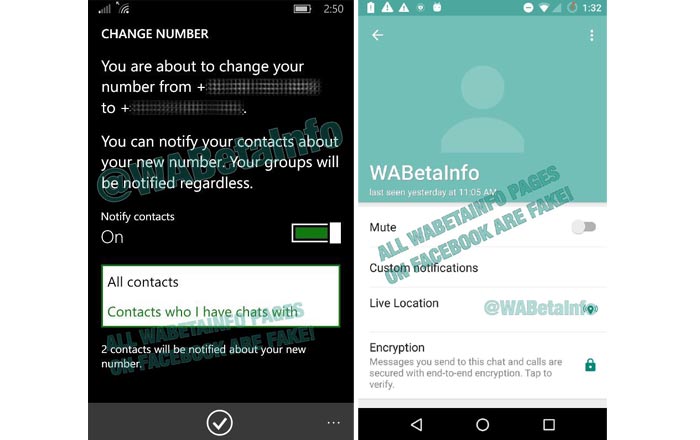 Switching numbers on WhatsApp is a big hassle for most users since their number is linked to their account on the app. People typically type out a message explaining the shift and broadcast it to all their contacts or a select few.

This cumbersome process may soon be at an end if the latest version of WhatsApp’s Windows Phone beta is anything to go by. Version 2.17.130 brings with it a ‘Change Number’ feature that cuts down on the various steps undertaken normally when leaping from one number to another.

Change Number basically informs a person that they’re about to change their number and they can choose to notify their contacts about this. It mentions that groups will be kept informed of this modification regardless of whether or not the toggle is switched on.

Individuals have some freedom over who they get to alert about the change as well. They’ll be presented with 2 options. One lets them inform all their contacts and the second only to those who they have chats with. It should be noted that Change Number is disabled by default.

Even WhatsApp’s Android beta has some new features in store for users. A Live Location tool which was spotted in earlier beta versions has resurfaced one again, this time for one-on-one chats. The choice initially appeared only for groups, letting people share their current location in real-time. This too is disabled by default.

You can download the latest WhatsApp for Android beta here and Windows Phone beta here.