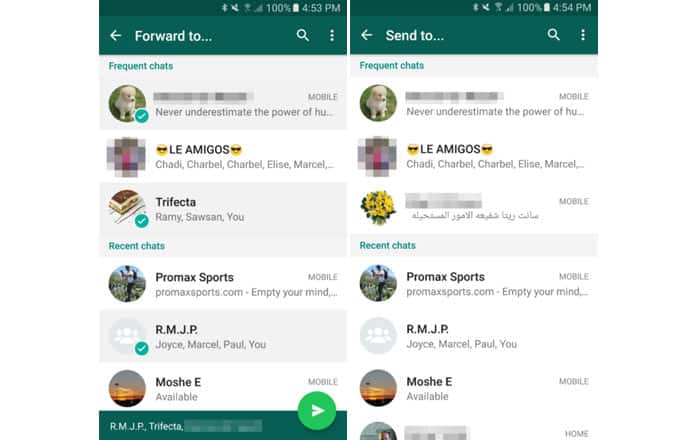 WhatsApp for Android users have started receiving the app’s new voicemail feature in an official update, just a few days after iOS patrons began getting it. The beta version of the former has additionally gotten a new feature which makes forwarding content to multiple contacts a breeze.

WhatsApp consumers will see the new Voice Message, Call Again and Cancel options when their call gets ignored or rejected. Tapping on the first allows them to record an audio clip which will automatically pop up in the conversation window just like a regular voice memo.

The latest WhatsApp update to version v2.16.225 also brings the new secret font feature into play. To recall, news about this hidden feature came out about a month ago in the beta avatar of the application. People can try out the new FixedSys style by adding three grave accents (`) before and after a word or sentence.

Speaking of the beta version of WhatsApp, the latest one offers up a neat new feature which allows users to send or forward content and messages to multiple contacts at once. This would effectively replace the previous cumbersome process of having to send something one by one to different people.

To get started, all a person has to do is follow the normal procedure of sharing or forwarding text or media and press down on one contact in their WhatsApp list. This automatically prompts up the option to select multiple conversations including individual and group chats to send the content to.

WhatsApp is making this process easier by showcasing the three most frequent chats right at the top of the list. You can download the official version of the application via the Play Store and beta variant via APKMirror.