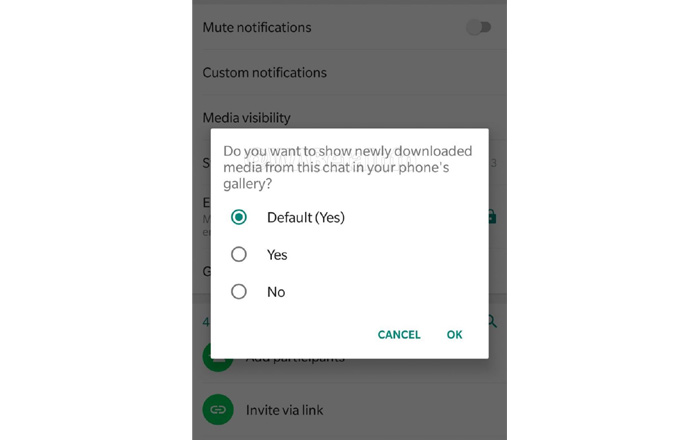 WhatsApp is constantly adding new features to its Android beta. The latest one was actually spotted last month under the name Media Visibility.

Media Visibility initially allowed you to hide the media which you received from your WhatsApp contacts from your device’s gallery. The feature disappeared in later versions of the WhatsApp for Android beta. It’s now made a comeback with a major difference. Instead of a blanket ban on all media, you can pick and choose which photos to conceal.

How to Activate WhatsApp Media Visibility

Specifically, you can decide whose photos and videos you want to be visible in your gallery. Media Visibility has changed its address because of this modification, shifting from Data and storage usage settings to the Contact/Group Info page.

To get started, you’d have to be on WhatsApp for Android beta version 2.18.194 or above. Next, head to a specific person’s Contact Info page. You’ll see a new Media Visibility option. Tap on it and you’ll be presented with 1 question and 3 choices.

Also See: WhatsApp may be working on a Windows 10 desktop app

The question asks if you want to show newly downloaded media from this chat in your phone’s gallery. The answers range from Default (Yes), Yes, and No. Tapping on Yes will leave things as they are, so that friend’s photos will continue living in your gallery. Tapping on No will hide the same photos from being visible.

As noted in the question, this tool only works with newly downloaded media. WhatsApp recently rolled out group video and voice chatting for its Android beta testers, along with regular iOS and Windows Phone users. It’s not clear when non-beta participants of the company’s Android app will receive these changes.

For now, you can download the latest WhatsApp for Android beta via APKMirror or sign up for its Google Play beta program.