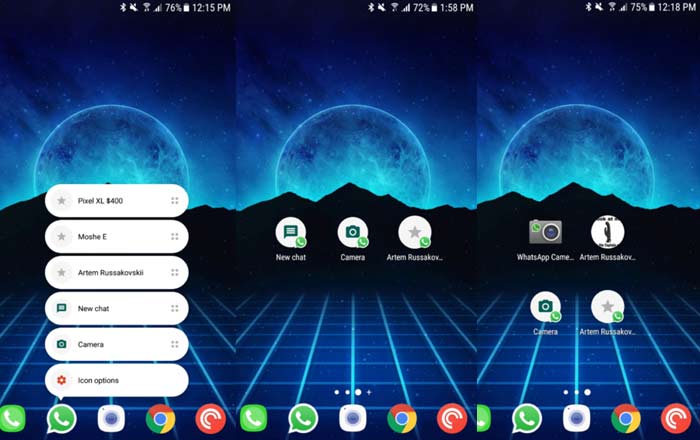 WhatsApp’s latest beta version has gotten support for launcher app shortcuts, allowing users to directly jump to a specific action without having to open the application itself. It appears to be working on Android Nougat-running devices and can be activated in Marshmallow by using a compatible tool like Nova Launcher.

Launcher app shortcuts appears to be in testing as of now and offers a limited number of options. As per Android Police, pressing on the WhatsApp icon will now trigger choices such as Camera, New chat, and Icon options. There are also 3 starred conversations up top.

However, it seems these are randomly chosen and have nothing to do with pinned or recent chats. This seems quite strange, especially given the feature is supposed to make things faster. It’s still early days though, so perhaps WhatsApp will improve its conversation selection process by the time the ability goes official.

It would also be ideal for a person or group’s profile photo to show up instead of a generic star. For instance, Apple’s 3D Touch tool for iPhones lets people view a list of their most recent WhatsApp chats complete with their images. That’s in addition to options like Camera, New Chat, Search, and Starred Messages.

Getting back to WhatsApp’s Android beta, the new options can be dragged off into individual shortcuts on a person’s homescreen. The application already has native widgets and shortcuts though, so this skill just serves as another way to do the same thing. The former additionally offers more freedom in terms of choice.

You can download the latest version of WhatsApp for Android beta via APKMirror.