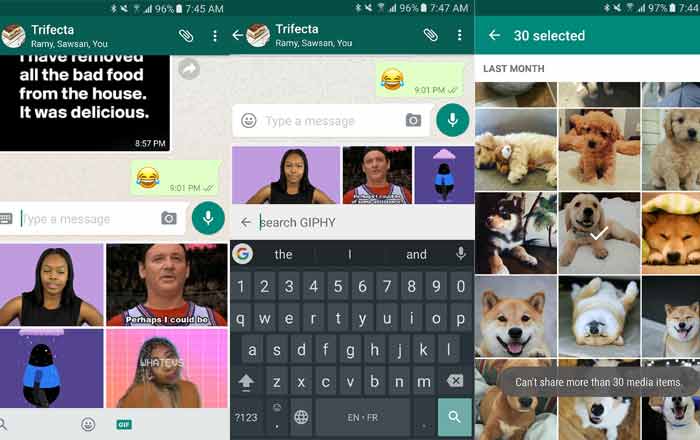 WhatsApp for Android got support for GIFs back in December last year, allowing anyone to send animations saved in their handset. Now it seems users can directly search and share GIFs straight from within the confines of the beta version of the app itself.

WhatsApp’s new GIF library pops up when tapping the emoji icon in the tool’s text box. A new bar at the bottom lets them switch between emoji and GIFs. People can either scroll through popular GIFs or search for one via Giphy and then proceed to insert them into the conversation immediately.

As per Android Police, WhatsApp‘s GIF search doesn’t require a Giphy client or the Gboard app to work. The addition of the ability should make it much easier to share animations faster since the earlier method relied on people having to exit the app and find a GIF or keep one ready in their phone.

Other than GIF search, WhatsApp for Android beta version 2.17.6 onwards has also increased the file sharing limit to 30. Individuals were previously forced to select just 10 and then repeat the process to add more media, a time-consuming procedure.

WhatsApp’s earlier updates notably introduced the ability to convert 6 second videos into looping GIFs and stream video. The latter skill works with both Wi-Fi and cellular data and lets people watch the footage immediately in order to decide whether it’s worth retaining as a download.

You can download WhatsApp for Android beta via APKMirror. You’ll also be able to check it out if you join the app’s Google Play Store beta program.