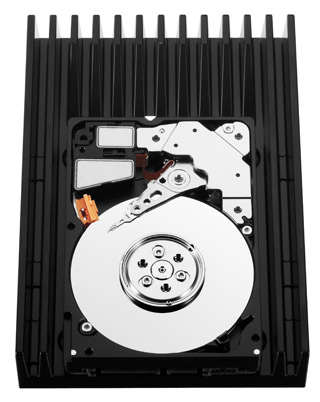 Western Digital has launched the VelociRaptor hard drives in the Indian market. The new release is the successor of its 10,000 RPM SATA “Raptor” series of drives. They deliver a 35 percent performance increase and are packed with twice the capacity.

It features a capacity of 300GB and is built into a 2.5-inch enterprise form factor. The 2.5-inch WD VelociRaptor drive is enclosed in the IcePack, a 3.5-inch mounting frame with a built-in heat sink. The IcePack keeps the drive cool.

The VelociRaptor hard drives feature a SATA 3 Gb/s interface, and 16MB cache deliver mind-bending performance. The drives are made reliable in high duty cycle environments. The design results in the highest available reliability rating of any SATA drive at 1.4 million hours MTBF.

Moreover, the VelociRaptor hard drive incorporates Rotary Acceleration Feed Forward (RAFF), which optimizes the performance when the drives are used in vibration-prone, multi-drive chassis, while the SecurePark feature takes care of the recording heads of the disk surface during spin up, spin down and when the drive is off. Hence the recording head never touches the disk surface, which results in an improved long-term reliability and increased drive protection when the chassis is moved.

“Demand for ever-higher PC performance continues to increase and WD is the leader in this category with the WD Raptor. We created WD VelociRaptor hard drives to lead PC enthusiasts into the next era of PC and Mac storage performance and satisfy their insatiable thirst for computing speed,” said Sharad Srivastava, Director Sales (India and South Asia), Western Digital. “The new WD VelociRaptor delivers the greatest performance and reliability of all SATA hard drives currently on the market.”

The Western Digital 300GB Velociraptor Drives are now available in the Indian market at Rs. 16,500.